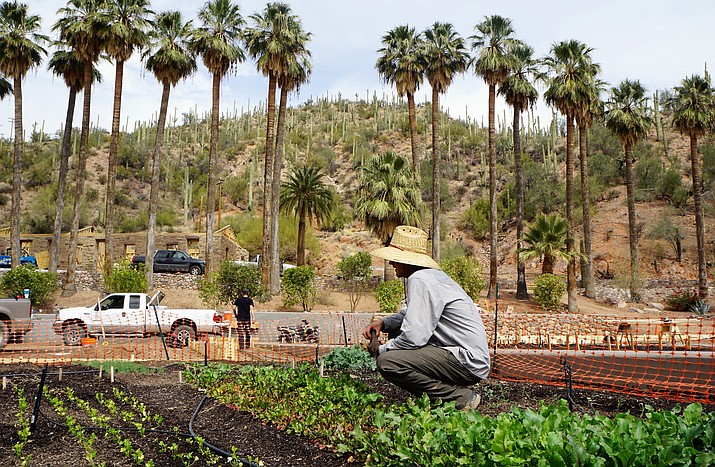 The Farm at Castle Hot Springs, which includes an organic garden and a greenhouse, was spared from the flood damage during last week’s monsoon storm. In a March 2018 photo, chief farmer Ian Beger explains the varieties being planted in the garden. (Cindy Barks/Courier, file)

Castle Hot Springs’ historic springs and grotto– shown in a March 2018 photo – were among the areas flooded with mud and rocks during a severe monsoon storm on July 11. Workers are currently cleaning out the flooded areas, and management hopes to have the resort open by early November. (Cindy Barks/Courier file)

A storm that brought “torrential walls of water” to the remote Castle Hot Springs in southern Yavapai County has pushed off the highly anticipated opening of the historic resort.

Steven Sampson, director of national sales for Westroc Hospitality, said Monday, July 16, that a storm the previous week had brought a mass of mud and rocks into portions of the resort.

“Castle Hot Springs sustained heavy flooding and rockslides during last week’s monsoon,” Sampson said, noting that the storm was the same system that brought flooding to the Phoenix-Scottsdale area on July 11.

Stressing that the resort suffered no structural damage, Sampson said, “We’re good; it’s just going to set us back a little bit.”

Although Sampson had estimated this past March that the resort would be open by October, he said that estimate has now been pushed to early November.

Crews are currently working to clean up the mud and rocks that deluged the historic hot springs area and grotto, as well as the area where 19 sky-view cabins will be located. The cabins have yet to be built in the space, so they were not damaged, Sampson said.

Although no rain gauges were on site at the resort, Sampson said a video from the storm showed “torrential walls of water” during the monsoon storm. The rainfall was unusually heavy, he said, noting that in the several years that the company has been working on the site, no such damage had previously occurred.

Since Sampson’s initial announcement about the resort renovations this past spring, a number of developments have occurred, including:

• Maureen and Terry Bauer are on board as the resident resort manager team. Terry is a 25-year veteran of the Chicago Police Department and a former director of security at Westroc’s Sanctuary on Camelback Mountain Resort and the Hotel Valley Ho. Maureen has served as head concierge at The Phoenician and with Fairmont Hotels & Resorts.

• The resort’s historic stone house has been rebuilt with many of the original rocks mined from a nearby quarry. The stone house will serve as a function room and chapel for weddings.

• Castle Hot Springs is being termed a “tranquil adult retreat” that embraces a “digital detox philosophy.”

• The resort brewery that will produce Castle Hot Springs Lithium Lager and other ales should be on-site at the resort’s old laundry building by summer 2019.

Castle Hot Springs dates back to the late 1800s, and was once a mecca for winter visitors among the nation’s rich and famous. The resort has been largely deserted since the 1970s when fire destroyed the main building.

Westroc Hospitality has been working on its renovations since about 2015, Sampson said, adding that plans involve bringing Castle Hot Springs back to its former glory.

Plenty of people are anticipating the opening. Sampson said he has received about 2,100 emails from people who want to book reservations.

“The amount of response I got from people is amazing,” he said.

Booking for the resort has not yet started, although Sampson said several group events are already planned in the winter and spring of 2019.