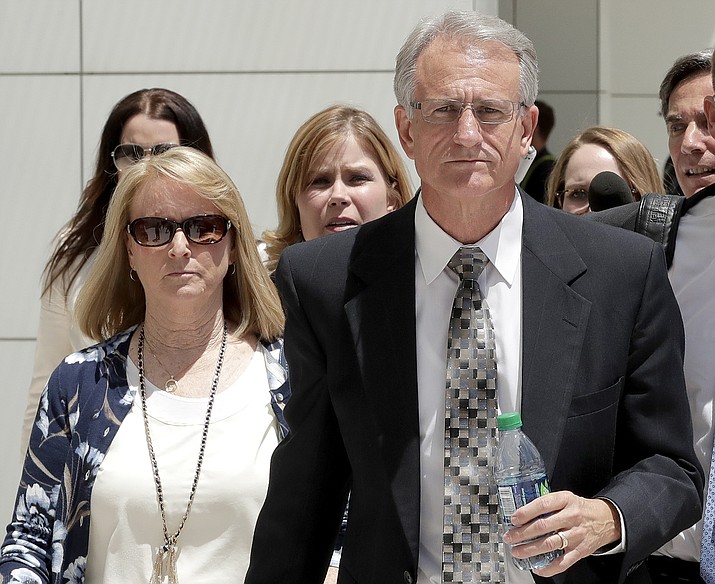 The move came after all 12 jurors told Judge John Tuchi they were “hopelessly deadlocked’’ in their efforts to reach a verdict in the case. Tuchi concluded that it made no sense to tell them to go and try again.

Tuesday’s action is at least an intermediate victory for former utility regulator Gary Pierce, who was accused of accepting a bribe from water company owner George Johnson in exchange for his vote on two issues. It means some jurors did not believe the government proved its case that the pair were guilty of bribery and fraud.

It also provides relief for the time being for lobbyist Jim Norton, who was accused of having arranged a scheme to get $31,500 to Pierce through a contract with Pierce’s wife, Sherry, to do political work for Johnson. Both faced the same charges.

Federal prosecutors have until Aug. 13 to decide whether to try again.

One issue that may affect that decision is what the jurors were thinking when they finally gave up.

Tuchi said he will ask them — in private — if they are willing to share with him what was the vote tally on each of the charges for each of the defendants.

The judge told the attorneys for both sides they cannot speak with any of the jurors. But Tuchi said he will share any information he gets from the jurors to help the lawyers decide what to do next.

But Taryn Jeffries, the lead juror, told Arizona Capitol Times that seven of the jurors, including herself, wanted to acquit all four defendants.

“We never saw the circle completed,’’ she said.

That goes to the claim of prosecutors that the money involved was a payment for the votes Pierce took, including one to allow companies like Johnson Utilities to pass along the cost of the owner’s income tax to ratepayers. But defense attorneys pointed out that Pierce had been publicly in favor of that change in policy years before.

The other claim by prosecutors was that Pierce was being paid by Johnson to increase the book value of Johnson Utilities, a move that enabled the company to increase its rates.

Jeffries told Capitol Times that she felt prosecutors knew the case was weak but decided to push ahead “and see if it stuck.’’

It isn’t just the government that has to make a decision if a new trial makes sense.

Before the trial began, prosecutors offered deals to all four defendants, allowing each to plead guilty to a single felony with no prison time in exchange for dropping all the other charges.

In the case of Gary Pierce and Jim Norton, that was not done simply to short-circuit the whole process. Prosecutors said it was conditional on getting their testimony and cooperation in connection with another case, one that apparently remains under investigation.

All four rejected the deal. But one or more could have different thoughts next time around if the alternative is another trial.

There were some facts on which both sides agreed during trial, though their explanations differed.

One is that Johnson hired Kelly Norton, then the wife of Jim Norton, to do some political consulting. Kelly Norton testified that she was told to contract with Sherry Pierce for some of the work, though prosecutors argued that the $3,500 a month she was getting was merely a cover for the money being funneled into the Pierce joint checking account.

Prosecutors had numerous records of checks and contracts they presented to jurors. But much of the case turns on Kelly Norton’s testimony about how her then-husband Jim, at Johnson’s behest, forced her to participate in the scheme to get money to the Pierces.

The other piece of the puzzle was what prosecutors said was a proposal to have Gary Pierce purchase a piece of commercial property in Mesa, but put Jim Norton’s name on it. The funds for the deal were supposed to come from Johnson. That deal, however, never went through.

Pierce, a former lawmaker, was first elected to the commission in 2006 and re-elected four years later before retiring in 2014 because he had served the full two terms allowed by law.

The indictment issued last year did not say what led federal investigators to look at the two Pierce votes.

Capitol Media Services reported in 2016 that the FBI had interviewed Pierce, supposedly over election issues related to the 2014 bid by his son, Justin, for secretary of state. But it became apparent the inquiry was wider, with a spokeswoman for the Corporation Commission saying at the time the agency had been contacted by the FBI and was “cooperating fully.’’

The federal probe, however, may have its roots in even earlier issues, going back to an investigation started with the state Attorney General’s Office.

That included allegations that Pierce, while a regulator, had met secretly with Don Brandt, chief executive officer of Arizona Public Service, and Don Robinson, his predecessor, while the utility was in the middle of a rate case before the regulatory agency. These were laid out in a letter from a whistleblower, later identified as a former commission staffer to Attorney General Mark Brnovich and others.

There also were charges by Wil Cardon, running in the Republican primary against Justin Pierce, that his father as utility regulator was using his position on the commission to get financial support for his son’s campaign from companies that are regulated by the panel.