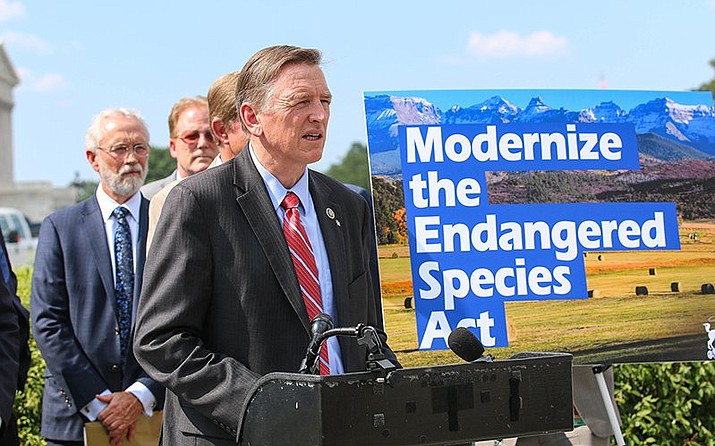 Rep. Paul Gosar, R-Prescott, is chairman of the Congressional Western Caucus, whose members unveiled a package of bills aimed to modernize the Endangered Species Act that critics said would gut the act instead. (Bryan Pietsch/Cronkite News)

“Everybody wants to have endangered species protected, but doing it in the right way, where everyone is included in the process,” said Rep. Paul Gosar, R-Prescott, who sponsored one of the nine bills. “Right now locals and private entities really have a prejudice against them.”

Environmental advocates were quick to criticize the legislation as “extinction bills” that would do more harm than good.

“Republicans are turning their back on the most vulnerable species in the country just to please polluters and other powerful interests,” said Noah Greenwald in a statement from the Tucson-based Center for Biological Diversity. “It’s disgusting and repugnant.”

Greenwald, endangered species director for the center, specifically cited Gosar’s bill as one that would “callously exempt dams and their associated reservoirs” from the act, despite the importance of those areas for species like salmon and yellow-billed cuckoos.

The bills were introduced by members of the Western Caucus, which Gosar chairs. They included his STORAGE Act, to ensure that “confused and mistaken” designations of critical habitat in limited water infrastructure areas is not used as protected habitat for endangered species.

Another bill, by Rep. Andy Biggs, R-Gilbert, would let the Interior secretary take a species off the endangered list if he or she receives an “objective, measurable scientific study” showing that a species has recovered. Such studies could come from states, academic researchers and other outside groups.

But Sandy Bahr, director of the Sierra Club’s Grand Canyon chapter, said Biggs’ bill would open the door to local interest groups that are “just trying to get rid of something that is an inconvenience to them.”

“These decisions are supposed to be based on science and not on the politics,” Bahr said. “What Biggs is proposing is to inject more politics into the protection, or lack thereof, relative to endangered species. I would not trust that they (local groups) would be presenting reports or information that was based on the science.”

Caucus members said that getting politics out of the process is one of the goals of their package of bills, with multiple lawmakers saying that Washington does not understand the issues in their districts.

They also criticized the Endangered Species Act itself, stating that less than 3 percent of species on the list have rebounded enough to be taken off.

But Greenwald disagrees, calling the act “the most successful wildlife conservation law in the world.”

“It has staved off extinction for 99 percent of the species under its care and put hundreds on the road to recovery,” he said. The caucus’ proposals, he said, would “absolutely push wildlife over the edge and into extinction.”

In Arizona, one species on the list is the Mexican gray wolf, which was hunted almost to extinction by ranchers before scientists were able to breed five remaining wolves on the border to 114 animals today.

Gosar said constituents have told him that wolves are again bothering livestock.

“Ranchers and farmers have lost livestock, have been non-compensated, and looking at the Mexican gray wolf, taking it into different areas that it was never part of the territorial aspect,” he said of the recovery efforts.

Bahr said that it’s important to ensure that species are protected so that their numbers do not decline to the point that they need to be bred in captivity and reintroduced to the wild, as did the Mexican gray wolf.

“The gray wolf is an example of why the Endangered Species Act should be stronger, not weaker, as they are proposing,” Bahr said.

But Gosar insisted that, like most Americans, he supports protecting animals, as they are a vital part of the state’s ecosystems and tourism industry.

“Arizona’s got lots of wonderful things, and vistas, and we want to make sure that the critters are there too, because that’s what draws all our tourists from around the world to see,” Gosar said. “When local people are invested in that and they’re a part of the recovery, and the success story, it’s even better.”