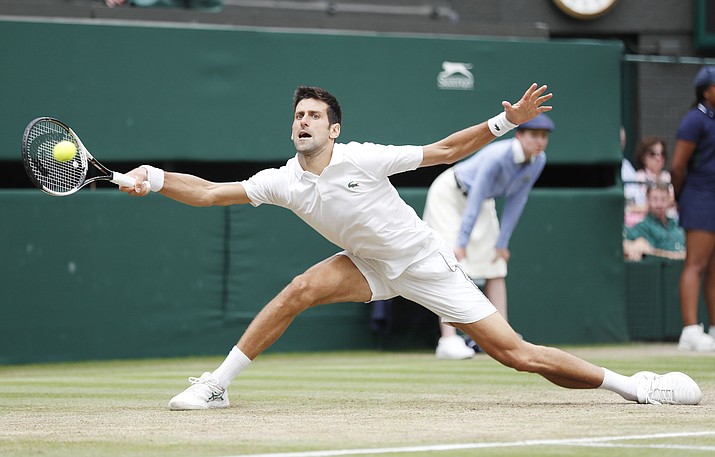 A quick look at Wimbledon:

Novak Djokovic will be seeking a fourth Wimbledon title and 13th Grand Slam trophy when he faces Kevin Anderson in the championship match. It is Djokovic's first final at the All England Club against someone other than Roger Federer, Rafael Nadal or Andy Murray.

For Anderson, this is the second major final; he was the runner-up to Nadal at last year's U.S. Open.

Both men might be excused for being weary: They participated in the two longest semifinals in the history of a grass-court tournament that dates to 1877. Anderson played for more than 6 1/2 hours Friday before getting past John Isner in a 26-24 fifth set; it's the second-longest match in Grand Slam history. Djokovic's 5-hour, 15-minute victory over Nadal didn't start until Anderson-Isner ended, and so it was carried over into Saturday before finishing 10-8 in the fifth.

"I'll just have to accept the circumstances," Djokovic said, "and try to recover as best as I can."

Anderson also played another long one in the quarterfinals Wednesday, erasing a match point and coming back after dropping the opening two sets to stun eight-time Wimbledon champion Federer 13-11 in the fifth.

Anderson, 32, and Djokovic, 31, are the first pair of men both older than 30 to meet in the final at the All England Club in the half-century of professional tennis. They've played each other six previous times; Djokovic has won the last five, including two at Wimbledon, while Anderson's lone head-to-head victory came a decade ago.

While Anderson is ranked No. 8 and is assured of making his top-five debut next week, Djokovic is No. 21, which would make him the lowest-rated Wimbledon champion since Goran Ivanisevic in 2001.

That's a bit deceiving: Djokovic has been No. 1, but he slid outside the top 20 for the first time in more than 11 years in May as a result of taking the last half of 2017 off, then playing poorly at the start of this season. He had surgery on his right elbow in February and has looked more like himself during these two weeks.

STAT OF THE DAY

5 — Number of unforced errors by Kerber, compared to 24 by Williams.

QUOTE OF THE DAY

"Two weeks ago, nobody expected I can go so far." — Kerber.