Prescott’s Greenways are scenic, but do residents want to use them?
City kicks off revitalization of the downtown creek trail system 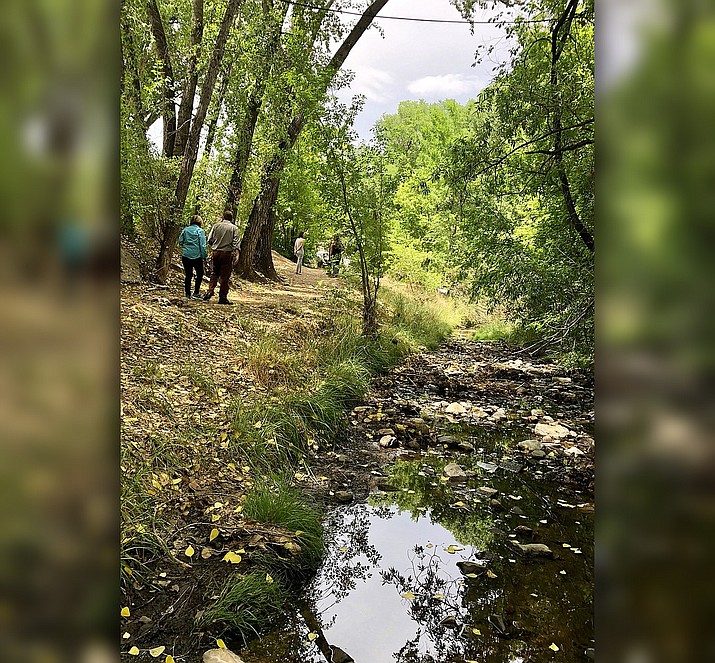 Prescott City Councilwoman Billie Orr, left, and City Manager Michael Lamar, right, walk along a section of Granite Creek near the Goodwin Street underpass. A new city committee is looking into ways to revitalize the Greenways Trails that border downtown-area sections of Granite and Miller creeks. The two creeks have been mostly dry in recent months, but currently have intermittent pools of water. (Cindy Barks/Courier)

Members of the new Granite Creek Corridor Revitalization Committee, along with community leaders, talk about the potential of the Greenways during a recent tour. (Cindy Barks/Courier)

These are just a few of the negatives used this past week to describe one of downtown-Prescott’s most prominent features — its creeks.

At the same time, local residents and community leaders also appear to agree that the winding, shady creek beds should be a strength for the downtown. Other words that have come up in the discussions have included “asset” and “unlimited potential.”

The Prescott Greenways — a trail system that follows Granite and Miller creeks through the downtown area — have long generated mixed emotions in the community.

While the trails are undoubtedly scenic and tranquil, they also have consistently produced worries about safety.

Grant Quezada of the Prescott Area Young Professionals Advisory Committee summed up concerns about the Greenways during a presentation to the Prescott City Council this past week.

“From the top view down, it looks a little seedy,” he said of the creek-side trails. Although Quezada grew up in Prescott, he said he had never walked the Greenway Trails until recently, when a group of Prescott Area Young Professionals members walked it together.

Although “not as unsafe as we thought it would be,” Quezada said the group’s consensus was that the Greenways were “not really well taken care of, and not really inviting.”

A new effort by a City of Prescott committee aims to change that in the coming months.

The Granite Creek Corridor Revitalization Committee conducted its first meeting about a month ago, and City Manager Michael Lamar said the goal of the group is to eliminate some of the Greenways’ persistent issues.

Lamar maintains that the stretch of Granite Creek running from about El Gato Azul on Goodwin Street to Granite Creek Park “has a tremendous amount of assets, and this is one that’s been under-utilized. I think it has unlimited potential.”

Lamar also walked the Greenway Trails recently, and he agreed that certain sections can seem uninviting. “A couple of the underpasses are a little foreboding,” he said, noting that the presence of panhandlers can be intimidating for trail users.

The charge of the new working group is to identify the Greenways’ issues, and come up with ideas to deal with them. Lamar says better lighting, new signage, cleared-out brush, and trash clean-ups all could help to improve the trails.

Kristy Everson, co-owner of Mandalay Homes, chairs the committee, and agreed that the creeks should be better utilized.

“We want to make the whole river something that’s an asset for the community,” Everson said. “It feels like we’re missing an opportunity.” 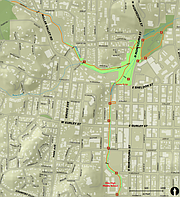 Among the issues facing the Greenways are the limited access points for getting onto and off of the trail.

Quezada listed that as one of the reasons the Greenways can feel unsafe. Once someone is on the trail, the series of chain-link fences along the route can make it difficult to get out, he said.

Another issue relates to handicap accessibility, which is almost non-existent on the trails.

Everson and city officials met this past week with Fred Veil, executive director of Sharlot Hall Museum, to discuss a possible improvement to the concrete ramp that leads down to the trail from the parking lot for Sharlot Hall’s archives building.

Everson pointed out that the existing ramp is too steep to be usable for wheelchairs. But, she said, the area has potential for making the ramp more gradual.

While the trail itself probably would not be handicap accessible because of its rough dirt surface, Everson said a sitting area near the ramp could allow wheelchair users to experience the creek-side atmosphere.

One concern that arose was the possibility that trail users would use the museum’s parking spaces, which are already spoken for.

Although the Greenways are currently attracting heightened interest, much of the system has been in place for decades.

Michael Byrd, executive director of the Prescott Creeks organization and a member of the city’s new revitalization committee, said the 1980s-era creation of the first Greenways Trails served as the impetus for the formation of Prescott Creeks.

The Greenways “have really come a long way,” he said.

While revitalization efforts have come and gone over the years, Byrd said he was pleased when he got the call notifying him of the new committee.

The key to the effort will be to find a way to better develop the Greenways while retaining the creeks’ environmental qualities, Byrd said. “It’s going to be tricky, but I’m excited this has come up,” he said.