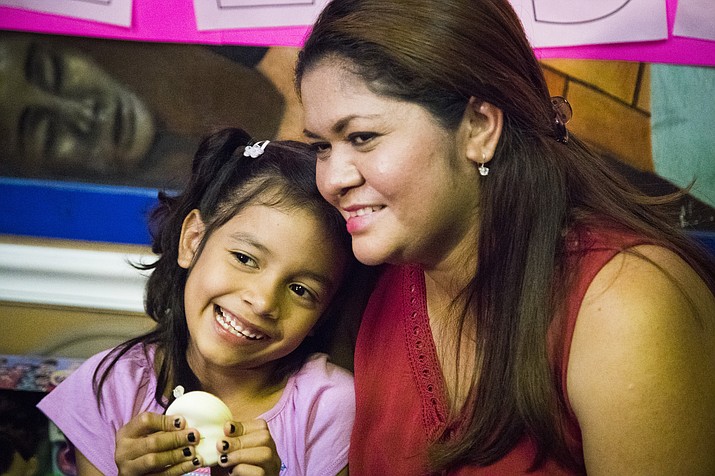 Allison, 6, and her mother Cindy Madrid share a moment during a news conference, Friday, July 13, 2018, in Houston. The press conference, the mother and daughter spoke about the month and one day they were separated under the President Donald Trump administration immigration policy that has separated families attempting to claim asylum in the United States. (Marie D. De Jes's/Houston Chronicle via AP)

HOUSTON (AP) — A 6-year-old girl from El Salvador who became a face of the Trump administration's practice of separating immigrant families at the border has been reunited with her mother.

Alison Jimena Valencia Madrid and her mother, Cindy Madrid, were separated after U.S. authorities detained them June 13 for illegally entering the United States near Harlingen, Texas.

Audio of the agonized child crying when she was separated — first published by ProPublica and later by The Associated Press — galvanized opposition to the separation of families. Alison pleaded with Border Patrol agents to call her aunt, whose phone number she offers from memory.

President Donald Trump reversed course on the splitting up of families on June 20 after a "zero tolerance" policy on illegal entry took effect in the spring.

The joyful reunion occurred early Friday in Houston. It was initially going to happen in Phoenix, where Alison was staying in a government-backed shelter, said family attorney Thelma Garcia. Madrid, 29, was released on bond from an immigration detention center in Port Isabel, Texas, not far from where she was arrested.

Alison told reporters that she felt desperate after being separated and that it felt good to reunite. Her mother echoed that sentiment.

"We are beginning to recover the time we lost," Madrid said. "We are very happy to be together as family again."

The mother and daughter plan to live with family in Houston and the mother will seek asylum, Garcia said. She may seek to move the case from immigration court in Harlingen to Houston.

Madrid said she brought her daughter to the United States in search of a better life.

"I believe she has the capacity to get by here," she said.

The administration has said that up to nearly 3,000 children have been separated at the border. Dozens of children under 5 years old were reunified under a court-ordered deadline earlier this week. The government now faces a bigger deadline of July 26 to reunify more than 2,500 children 5 and older.