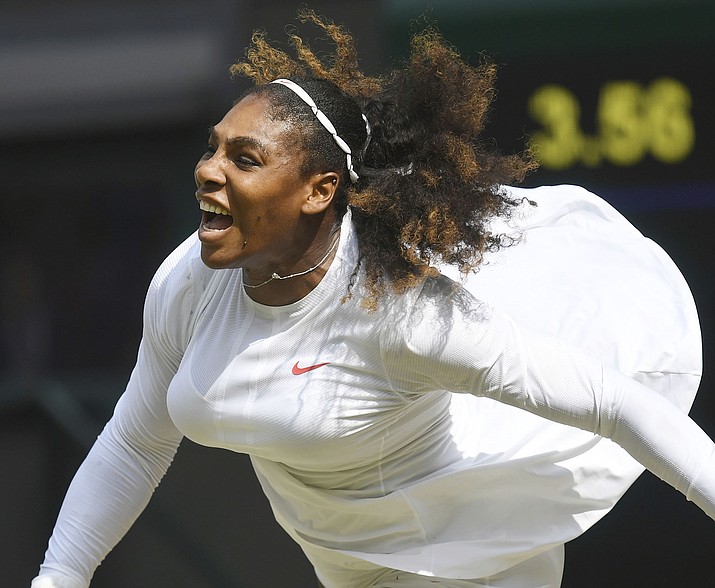 Serena Williams serves to Julia Goerges during their women’s semifinal match at the Wimbledon Tennis Championships in London. (Neil Hall/Pool via AP)

LONDON — A quick look at Wimbledon:

Serena Williams goes for her eighth Wimbledon title and first major championship since giving birth to her daughter, Olympia, on Sept. 1.

The 36-year-old American takes on Angelique Kerber, who lost to Williams in the 2016 final. Williams, a 23-time Grand Slam champion, is playing just her fourth tournament since returning to action in March.

“It’s been a crazy 10 months,” Williams said. “I was still pregnant at this time last year. That’s something I have to keep reminding myself.”

Kerber, a two-time Grand Slam champion, is playing in her first major final since her triumph at the 2016 U.S. Open. The German has rebounded nicely from a disappointing 2017, also reaching the semifinals at the Australian Open and the quarters at the French Open.

Before the women’s final begins, the Centre Court crowd will be treated to the conclusion of the men’s semifinal between Novak Djokovic and Rafael Nadal.

The former champions began their match after 8 p.m. local time on Friday after Kevin Anderson defeated John Isner in the second-longest match in Wimbledon history. Djokovic saved three set points before taking the third-set tiebreaker to establish a 6-4, 3-6, 7-6 (9) lead. Play will begin at 1 p.m. local time, with the women’s final to follow.

STAT OF THE DAY

6 hours, 36 minutes — the length of Anderson and Isner’s match — the second-longest in Wimbledon history.

QUOTE OF THE DAY

“If a match is 12-all in the fifth set, I don’t think it needs to continue.” — Anderson on the stage of a match at which Wimbledon should consider introducing a fifth-set tiebreaker.