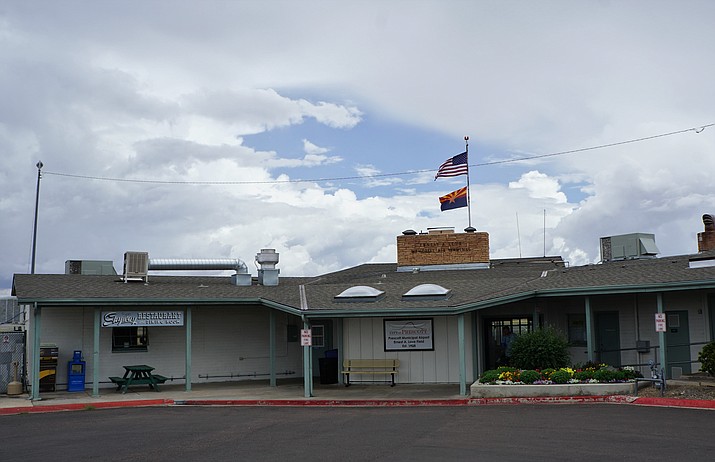 The terminal at the Prescott Municipal Airport has been without commercial flights since March, when the previous air carrier, Great Lakes Airlines, suspended service. Currently, activity at the terminal is mostly limited to a restaurant and a car-rental booth. (Cindy Barks/Courier)

Even before a new commercial airline arrives in Prescott by late summer or early fall, plenty of activity is expected at the Prescott Municipal Airport.

Earlier this month, the Prescott City Council unanimously recommended that SkyWest Airlines be chosen as Prescott’s next commercial air carrier.

A final decision by the U.S. Department of Transportation is still pending, and Prescott Airport Director Robin Sobotta said this week that the decision likely would not happen until after July 16 — the last day for additional feedback from the city.

In the meantime, the city is gearing up for a number of projects that aim to increase the convenience and safety at the airport.

Several of the improvements will focus on the 70-year-old airport terminal. “It really is showing its age,” Sobotta said of the 1948-era terminal.

The recently approved city budget for the 2019 fiscal year includes $150,000 for improvements to the terminal, Sobotta said, although she expects the projects to cost less than that. “I don’t believe we will be exceeding $100,000,” she said.

After the City of Prescott’s longtime air carrier Great Lakes Airlines suspended service in March, the Prescott Municipal Airport has been without commercial flights. Currently, the city is awaiting word from the U.S. Department of Transportation on whether a proposal by SkyWest Airlines would be accepted to take on the city’s Essential Air Service contract. (Cindy Barks/Courier)

Among the changes needed to accommodate the 50-seat airplanes that SkyWest has proposed will be a new baggage-claim area.

Currently, Sobotta said, the airport uses a “lobby drop” for passengers’ bags — a situation that she said is not convenient for passengers or the airline.

The improvements will include the construction of an outdoor shelving area, where the airline can drive by in its tug vehicle to drop off the bags. The terminal does not have space inside, Sobotta said, and a terminal expansion is not in the works.

Other terminal improvements will involve: moving the check-in counter to the right, which will allow for more seating in the left side of the terminal; technological improvements; improvements for handicap accessibility; and renovations in the air carrier breakroom.

Sobotta said most of the improvements will be done in-house by city staff.

The city will wait to get started on the improvements until a final decision is made by the U.S. Department of Transportation, and Sobotta expects the work to be done before the new airline arrives in late August or early September.

Basically, Sobotta said the terminal improvements would be interim measures to bring the terminal “to some level of convenience for the airline and the passengers.”

For years, the city has discussed the possibility of building a new terminal, and this year’s budget includes $450,000 for the design of the new facility.

Sobotta said she expects a request for proposals for design of a new terminal to go out sometime this fall. As with the improvements to the old terminal, the city is waiting for federal approval of the new EAS contract before moving forward.

To possibly cover a portion of the cost of building the new terminal, Sobotta said, “We’re in discussion right now with the FAA (Federal Aviation Administration).”

At about the same time as the interim terminal work, a major project also will get underway on the airport’s main runway.

The $6 million project has long been in the works, and relates to federal safety standards. The bulk of the cost is being covered by an FAA grant.

The existing runway consists of “very old and severely deteriorated asphaltic concrete and pavement, and has reached the end of its useful life,” stated a June city memo that explained the upcoming project.

The notice to proceed to the contractor, Fann Contracting, is scheduled for July 30, and Sobotta has said that the needed runway closures are expected to occur before the arrival of a commercial airline.

On July 3, the Prescott City Council considered seven proposals from airlines interested in taking on the city’s Essential Air Service (EAS) subsidy contract. SkyWest’s proposal for 50-seat jets flying to Los Angeles and Denver was the unanimous choice of the council.

The proposal also got support from the Town of Prescott Valley. In a joint statement after the July 3 meeting, Prescott Valley Mayor Harvey Skoog said, “Our leadership wholeheartedly supports the selection of SkyWest Airlines. They have a solid reputation of providing reliable air service to communities across the country.”

“SkyWest will provide our citizens, and the entire region a reliable, comfortable and convenient way to fly anywhere in the world from the Prescott Municipal Airport,” he said.