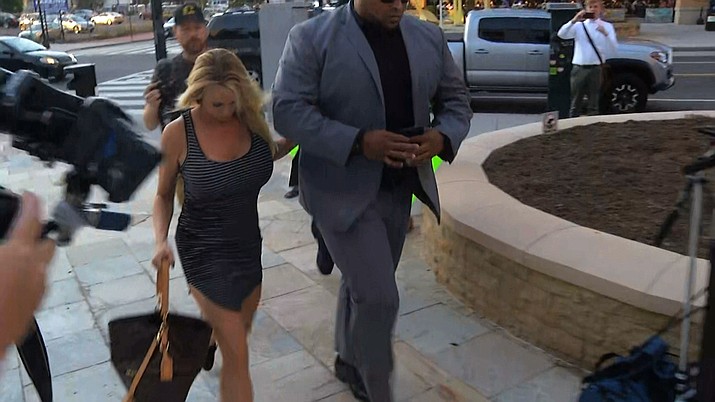 In this image from video, Stormy Daniels arrives at the strip club Cloakroom for a performance Monday, July 9, 2018, in Washington. (Tom Sampson/APTN via AP)

WASHINGTON — As President Donald Trump exercised his power by nominating Brett Kavanaugh Monday night at the White House, adult film star Stormy Daniels exercised hers about a mile away, wearing nothing but black heels.

“She is the one person who could take down Donald Trump,” said Diana Lautenberger, 34, who said she works for a nonprofit group.

Dollar bills, some real and some fake, rained down on Daniels as she danced around the stage of the Cloakroom, a strip club whose grand opening she headlined Monday night.

And yes, at roughly the same time Trump was doing his reveal, Daniels was taking it all off — the pink dress, the gloves, the bracelets and the feathered boa — to songs like “Big Spender” and “Material Girl.”

“All Things Revealed,” as the 15-minute show is called, is apparently a case of epic timing. Deliberately or not, it’s the latest chapter in Daniels’ remarkable ability to shadow Trump’s presidency.

“The stars aligned,” said Cloakroom co-owner Andre DeMoya, who said he first reached out to Daniels’ agent, and she accepted. The date had been moved at least once.

Daniels, whose real name is Stephanie Clifford, has said she had sex with Trump in 2006 when he was married, which Trump has denied. She’s suing Trump and his former longtime personal lawyer and fixer Michael Cohen and seeking to invalidate a nondisclosure agreement that she signed days before the 2016 presidential election.

It was unclear how much money the club and Daniels were earning from the event, which charged $50 and up per seat. The venue, DeMoya said, can seat a couple hundred people, but it was not nearly full on Monday night.

Trump: ‘Tell people not to come to our country illegally’

WASHINGTON — President Donald Trump says he has a solution to the federal government missing a court-imposed deadline to reunite migrant children with their families: “Tell people not to come to our country illegally.”

On Monday, Trump’s administration acknowledged it would not meet a Tuesday deadline set by a San Diego federal judge to reunite detained children under 5 with their families.

Addressing questions about the missed deadline before departing the White House on Tuesday for Europe, Trump says, “That’s the solution. Don’t come to our country illegally. Come like other people do. Come legally.”

Trump is also criticizing some Democrats for calling for an end to U.S. Immigration and Customs Enforcement, claiming their position proves “Democrats want open borders, and they don’t mind crime.”