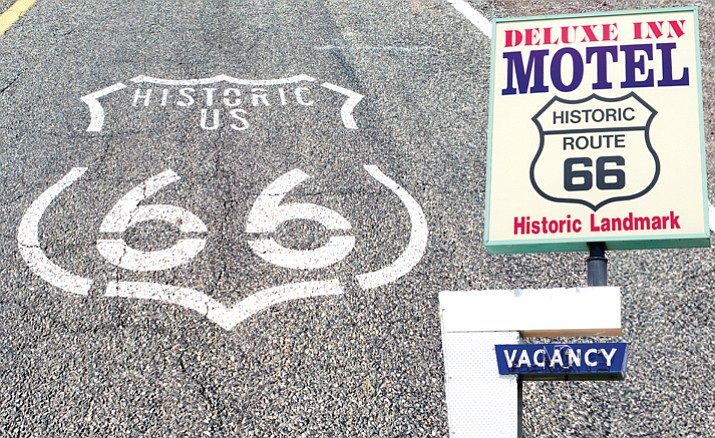 A bill in the U.S. Senate will boost tourist and funding for Historic Route 66. The Deluxe Inn Motel in Seligman could be one of those benefiting from the bill passing.

Well if you ever plan to motor west

Just take my way, it’s the highway that’s the best

Get your kicks on Route 66

Route 66 connected Los Angeles to Chicago before we had interstate highways.

The road now called “Historic Route 66” is closer to Historic Trail designation following unanimous passage of a bill by the House of Representatives in June.

The bill is in the hands of the U.S. Senate for consideration.

It designates the highway, including “all the alignments of U.S. Highway 66 in existence between 1926 and 1985,” about 2,400 miles, from Chicago, Illinois, to Santa Monica, California, as the Route 66 National Historic Trail. Route 66 runs through northern Arizona, including Seligman and Williams.

The Route 66 National Historic Trail would be administered by the Secretary of the Interior, acting through the National Park Service. The bill calls for the administration to conduct the trail “in a manner that respects and maintains the idiosyncratic nature of Route 66.”

LaHood said the bill, introduced Feb. 9, 2017, would provide a permanent program to preserve, promote, and economically develop the highway.

Proponents of the preservation of Route 66 are concerned that millions of federal dollars will be lost when the Route 66 Corridor Preservation Program, passed in 1999, expires in 2019.

“With passage of H.R. 801 in the House, we are one step closer to ensuring our efforts to preserve, promote, and develop Route 66,” said Bill Thomas, chairman of the Route 66 Road Ahead Partnership board of directors.

Some opposition to the plan arose in November, when the Williams City Council, concerned that the bill would give control of Route 66 and surrounding land to the federal government, passed a resolution opposing the bill.

But an amendment to the bill, added in January, now “actually specifically prohibits the federal government from asserting any control over the land, in terms of regulatory or (a) restrictive way,” and that includes a ban on taking land through eminent domain or condemnation, said Daniel Milowski, a Route 66 historian at Arizona State University.

Milowski said passage of the bill would help drive tourism to the area.

“What that does for communities along the way is, it essentially establishes resources and federal support for the preservation of the trail, promotion of various sites and communities … and gives them other materials to tap into to help them promote their status.”

He added that the National Park Service would also “provide funding for development and preservation for resources along the trail.

“Really, what this amendment is doing is giving permanent status to Route 66 as a Historic Trail,” Milowski said, as opposed to the time-limited kind of funding provided by the expiring Route 66 Corridor Preservation Program.

The Senior Field Director at National Trust for Historic Preservation, Amy Webb, said, “The benefits it would bring include increased visibility for Route 66, which would bring more travelers, which would translate to more customers for the Mom and Pop businesses, so it would really help in terms of economic development.”

“It really is a win-win, for communities and the country,” Milowski added. “It preserves a travel route that had a significant impact on United States history … many of these communities will have museums dedicated to local aspects of Route 66, and all of those organizations can tie into these funding sources.”

The bill is currently before the Senate Committee on Energy and Natural Resources.