Howard: ‘Borg vs. McEnroe,’ the movie
My Point 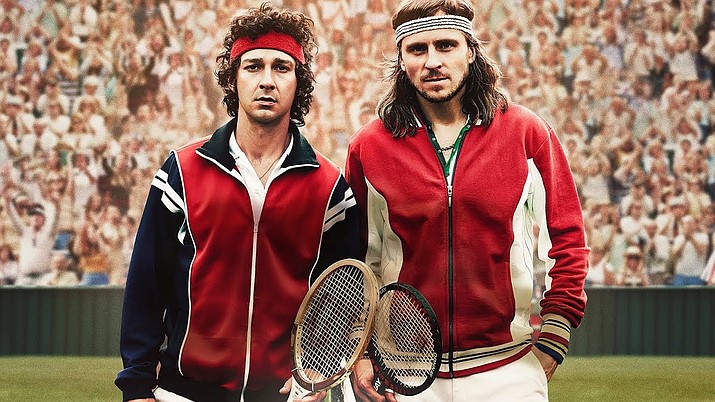 I just finished watching the movie “Borg vs. McEnroe,” and I remember watching the finals with a “Breakfast at Wimbledon” back in 1980 when it was happening, but the movie is less about who won that championship and more about how each person, Bjorn and John, reached that point in their lives.

This independent films main two actors were Shia LaBeouf, who plays McEnroe, and Sverrir Gudnason, who plays the part of Borg. It was written by Ronnie Sandahl and directed by Janus Metz.

Even though neither Borg nor McEnroe were used as consultants, Borg’s son Leo auditioned and received the part of the younger Bjorn around the age of 11 to 16 and did a really good job.

The background of each of these players was much more similar than their later years would depict.  Bjorn as a junior tennis player had a temper that rivaled McEnroe’s to the point he was banned from playing tennis for about six months.  Maybe the same should have happened to Johnny Mac in his youth, but from what I’ve read that wasn’t the case.

Both players were tormented with the thoughts of perfection, but Bjorn had a turning point when he agreed he would not lose his temper in return for getting to play in a Davis Cup match at the age of 15. It seems he kept that promise even though it might have been part of the reason he retired at the age of 26.

McEnroe, Bjorn’s junior by a few years, held the Swede in very high regard. So when he was sized up in 1980 to be the one to possibly knock Borg off his four straight years of Wimbledon wins ,the pressure was enormous for both to succeed.

The movie tends to swing back and forth from childhood and teenage years to the present (1980), showing the trials and tribulations of what they experienced, and then just how tough great players tend to be on themselves.

This character study of each player, one who tries to keep everything inside being cool, silent and stoic, as well as a teenage heartthrob, watching the other — seen as the villian, hotheaded, brash and booed, makes for an interesting mix of fanfare love/hate relationship, even among their peers.

Each have their own degree of anxiety, loneliness, longing, superstition and aloofness, while battling inward demons.

This Wimbledon final came down to five very close sets, with the fourth set garnering one of the best tie-breaks played in professional tennis. Certainly enough to keep the crowd on the edge of their chairs throughout the whole match.

With the admiration John had for Bjorn, and it seems vise-versa, where in real life and in the movie showed where Borg had a few calming words for John — said in a manner of true concern, which sometimes doesn’t happen during an important match, not to mention a Wimbledon finals that both wanted to win badly.

It’s pretty tough to reach the highest heights in the game of tennis and both of these players achieved that in a great rivalry that ended much sooner than any of us imagined.

Overall the movie had some pretty good reviews, and if you’re a tennis player it’s a must to watch. Would love to have them interviewed together and a good Q and A talking about their time playing one another. Maybe a future TENNIS Channel moment.

Howard: What a great time to be a tennis fan
Column: Bjorn Borg - A maverick in thought and style
Howard: The tennis boom of the early open years
Column: No substitute for heart, passion
Howard: What’s the Laver Cup all about?