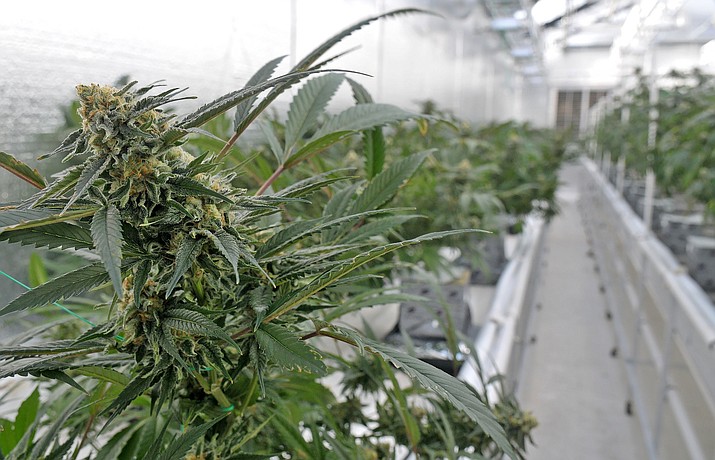 In this 2015 file photo, marijuana plants fill one of the greenhouses at the Sun King Labs marijuana grow house in Chino Valley. An effort by a group called Safer Arizona was unable to gather enough signatures to place a measure on the November ballot to allow Arizona voters to decide whether they want to legalize recreational use of marijuana. The initiative would have ended the monopoly medical marijuana dispensaries now have and allowed any retailer to sell marijuana to adults. (Courier file photo)

PHOENIX — Arizonans aren’t going to get a chance to decide whether they want to legalize recreational use of marijuana, at least not this year.

David Wisniewski, chairman of Safer Arizona, revealed late Thursday he and other volunteers had been able to gather only about 75,000 signatures on petitions, which would have removed all criminal penalties for simple possession and made things like selling to a minor a civil fine.

Wisniewski said the campaign may have been doomed from the start, what with no money from those that might have an interest in legal marijuana, like owners of existing medical marijuana dispensaries. That’s because his initiative would have ended the monopoly these dispensaries now have and allowed any retailer to sell marijuana to adults.

He said any future proposals to legalize the drug are likely going to need the cooperation of — and financing from — dispensary owners.

A well-funded campaign could have a chance.

In 2016 a proposal by the dispensaries to allow any adult to possess up to an ounce of the drug failed by just 3 percentage points.

The Marijuana Policy Project, which pushed through the 2010 Arizona Medical Marijuana Act, already is weighing a 2020 measure. Spokesman Morgan Fox said that, in general, these efforts do better in presidential election.

He said off-year midterm elections tend to result in higher turnout among more conservative voters who are less likely to support legalization.