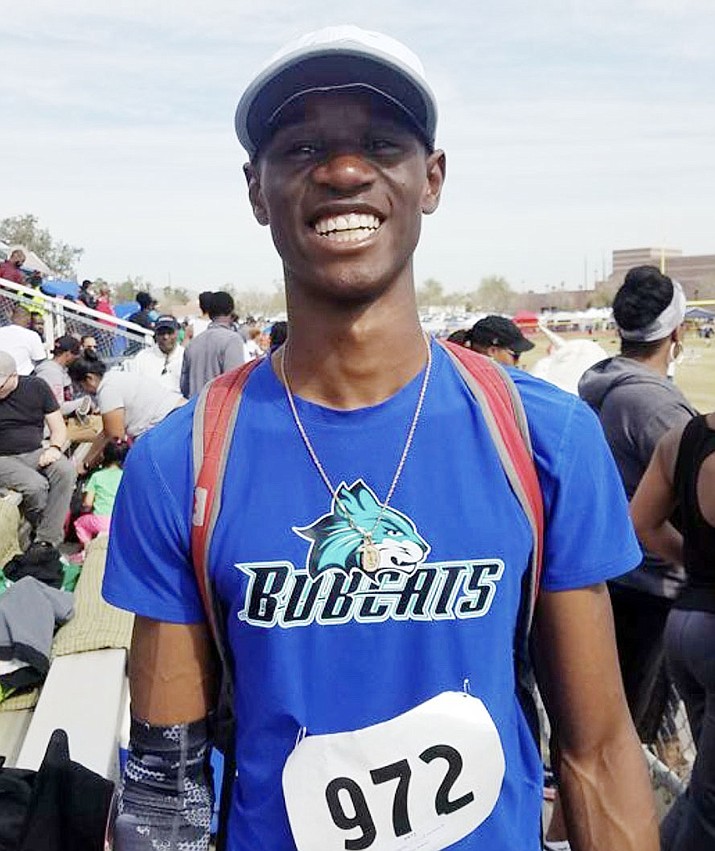 Nnantah, who placed fourth for the Bears’ varsity team in the 300m hurdles in 39.56 seconds at the Arizona Interscholastic Association’s (AIA) Division II state meet May 19-20 in Mesa, races in the offseason for the Phoenix Bobcats USATF youth club team under coach Erwin Jones.

“He’s been coaching for them the past 30-plus years,” Nnantah said of Jones’ tenure with the Bobcats, a program designed for athletes ages 8-18. “We probably have almost 100 kids on our team. It [USATF] is a great organization, and being with the Bobcats is a great club that I’m proud to have been a part of for the past three years.

“Each year, I’ve gotten better with each of my events, and I will continue to work hard and see where it takes me each and every year.”

On June 16-17 at the USATF Junior Olympic State Championships in Mesa, Nnantah qualified for regionals by placing in three events. In the 110m hurdles, he finished fourth with a personal-record time of 15.88 seconds. In the 400m hurdles, Nnantah also nabbed fourth, recording a time of 57.75 seconds. In the open 400m, he snared third place in 52.30 seconds.

“I’m super proud of Charles, and I can’t wait to see all of his hard work pay off,” Shaver added. “He is a very bright and intelligent young man with an incredible desire to be the best at whatever he does.”

This weekend at regionals, Nnantah is entered in the 17- and 18-year-old age division. This year, prior to the summer, he ran for the Bobcats at three meets during the indoor season in January before taking a break for the high school season in the spring.

“I started back up in June once the Junior Olympics started,” Nnantah said. “Hopefully if I get Top 5 at regionals [and earn medals] in all of my events, I’ll have one more meet left in the Junior Olympics [at the national championships], from July 23-29 in [Greensboro] North Carolina. And then, after that will be the end of my Bobcats season.”

Once the summer ends, Nnantah said he’ll take a month to a month and a half off to prepare for school in August. In early to mid-September, Nnantah will return to training for the 2019 track season at Bradshaw Mountain.

“I definitely want to run track in college, for sure,” Nnantah added.