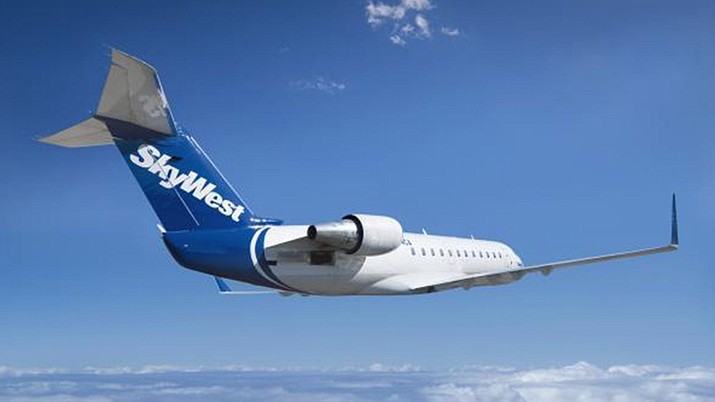 SkyWest, a subsidiary of United Airlines, is set to become the new carrier at Prescott Airport. (SkyWest Airlines/Courtesy)

Regional jets carrying local passengers to Los Angeles and Denver, with connections to United Airlines flights all over the world, could soon be a regular feature at the Prescott Municipal Airport.

The recommendation now goes to the U.S. Department of Transportation, which will make the final decision on Prescott’s Essential Air Service (EAS) subsidy. The new carrier would replace Great Lakes Airlines, which suspended its service to Prescott in March 2018.

A SkyWest baggage handler loads bags on a plane in one of SkyWest’s other cities. (SkyWest Airlines/Courtesy)

If approved by the federal department, the recommended contract would bring SkyWest’s 50-seat jets to the Prescott Airport by late August/early September.

In addition, SkyWest would offer full “code share” and cobranding with United Airlines, which offers thousands of flights a day across five continents.

As city officials see it, SkyWest’s service would be a major upgrade for the airport, which has in the past been served by Great Lakes’ smaller twin-turboprop aircraft.

“We have the opportunity to change the course of air service for Prescott and Yavapai County,” Sobotta told the Prescott City Council during a special meeting Tuesday afternoon.

Sobotta and her staff strongly recommended the SkyWest proposal, maintaining that the major airline would be most beneficial for the community.

“It is pretty obvious from the strengths and weaknesses and from the enormous reputation that (SkyWest) would be our choice,” Sobotta told the Airport Advisory Committee.

Both city boards agreed, unanimously choosing SkyWest out of the variety of proposals.

“We can’t mess this up; we’ve got to get it right this time,” Councilman Steve Sischka said before the council vote. “The community has had a lot of problems with air service. We can’t go with (an airline) that might give us good service over time. We have to go with an established success story, and I think SkyWest is that success story.”

The city had plenty to choose from in making its recommendation. By the July 2 deadline, seven airlines had submitted proposals to take on Prescott’s EAS subsidy contract.

The proposals featured everything from Advanced Air’s nine-seat King Air 350 aircraft offering multiple weekly flights to Phoenix and Hawthorne, California, to Silver Airways’ idea of offering a Thursday evening/Sunday roundtrip from Prescott to Las Vegas along with daily service to LAX on its new 46-seat ATR-42 aircraft.

Sobotta’s evaluation of the proposals listed a number of strengths for SkyWest, including its extensive experience with the EAS subsidy (33 cities), its handicap accessibility, and its recently signed multi-year partnership with Embry-Riddle Aeronautical University.

The only weakness Sobotta listed for SkyWest was the fewer number of daily flights it would offer, as compared with some of the bids for airlines using nine-seat aircraft.

But, Sobotta said the six weekly flights each to Los Angeles and Denver could increase as the community’s usage grows. She pointed out that Flagstaff, which has a similar population as the Prescott/Prescott Valley area, currently has 60,000 enplanements (passengers boarding planes) per year.

Prescott’s goal of reaching 10,000 enplanements per year should be realistic with SkyWest’s proposed flights, with plenty of room for growth, Sobotta said. “I think with this type of opportunity, this is only the beginning,” she said.

SkyWest is proposing an annual subsidy amount of about $3.9 million. That compares with the $2.7 million subsidy that Great Lakes was receiving during its past EAS contract.

Late Tuesday, Prescott and the Town of Prescott Valley released a joint statement of support for the SkyWest proposal.