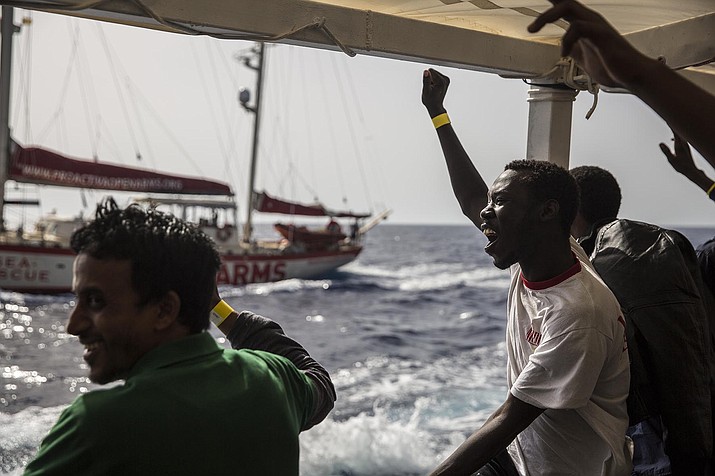 ABOARD THE OPEN ARMS IN THE MEDITERRANEAN SEA (AP) – The full moon was the only light as a terrified 9-year-old boy from Central African Republic climbed into a rubber dinghy held together with duct tape, risking death in the dark waters off Libya along with his parents and 57 other trafficked migrants.

After a long night on the Mediterranean Sea, a Spanish rescue boat spotted them on the horizon after dawn.

"People were screaming, I was afraid," said the boy, Krisley Dokouada. "But after seeing the rescue boat, I knew there was no more danger."

Their savior Saturday was the Open Arms, which became the third rescue ship run by humanitarian aid groups to draw the ire of Italy's anti-migrant interior minister, Matteo Salvini. He has vowed that Italy's new populist government will no longer allow such rescue boats to dock in Italy, which has taken in hundreds of thousands of migrants rescued at sea in the last few years.

Malta then angrily rebuffed Salvini's claim that the tiny Mediterranean nation was closest to the rescue ship and should give it safe harbor.

By nightfall Saturday, Spain agreed to let the Open Arms dock in Barcelona, where the humanitarian aid group which operates the vessel, Proactiva Open Arms, is based, the Spanish government said.

The Open Arms and its companion ship, the Astral, will likely need four days to reach Barcelona, said the Astral's captain, Riccardo Gatti.

Also on Saturday, in an unrelated rescue much further west of the central Mediterranean where the Open Arms rescue took place, Spanish authorities reported saving 63 migrants trying to reach the country's southern coast from North Africa.

While European politicians bickered about where the migrants should go, those rescued by the Open Arms were jubilant – jumping, chanting and hugging their rescuers.

Krisley's tensions melted when he was allowed to sit for a few minutes in the captain's seat. With sparkling eyes, the only child among the migrants smiled shyly after the rescue crew called him "captain."

For months, his family had lived in Libya, while they awaited their chance to make the Mediterranean crossing. His mother, Judith Dokouada, said she never left the shelter for fear of being kidnapped or sold as a slave, a fate many African migrants have spoken of to human rights advocates.

"There is war at home. They kill people, they beat people, they rape women, they kill boys," said Dokouada, 32. "We don't have peace."

She and her husband want to raise Krisley in a safer place. She expressed hope the family could apply for refugee status and settle in Spain.

Another of those rescued, Bitcha Honoree, said he knew the risk he was taking when he boarded the dinghy in the middle of the night.

The 39-year-old man from Cameroon said that he was sold twice as a slave, kidnapped and tortured in Libya while awaiting his chance to get aboard a smuggler's boat. His brother sold his home in order to pay the ransom demanded by his captors in largely lawless Libya.

"It's better to die than to continue being treated this bad," he said.

Many have died on the dangerous crossing. The U.N. refugee agency says 1,137 migrants are estimated to have died on Mediterranean so far this year. And that does not include the 100 migrants reported missing and feared dead at sea Friday off the coast of Libya.

A few hours after the Open Arms rescue Saturday, Salvini declared that the Spanish rescue boat "can forget about arriving in an Italian port" and claimed it should go to Malta.

Even though the number of migrants arriving in Europe is sharply down this year from 2017, migration issues have deepened political divisions in the European Union, fueled in part by the demands of anti-migrant nationalist parties.