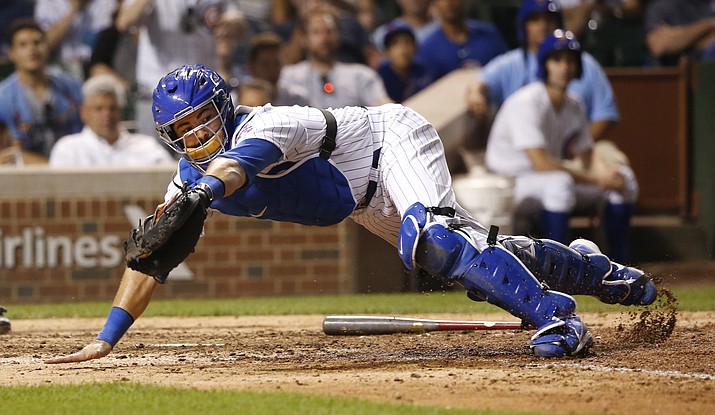 Avila fills a roster spot vacated by Chris Iannetta, who shared the catching duties last year and left for an $8.5 million, two-year deal with Colorado.

The 31-year-old Avila, a son of Detroit general manager Al Avila, hit .264 with 14 homers and 49 RBIs last year for the Tigers and Chicago Cubs, who acquired him at the July 31 trade deadline. He is a .243 hitter in nine major league seasons.

Avila, speaking in a conference call Wednesday evening, said the deal came together over the last two weeks, and he likes the makeup of the team he is joining.

“Essentially the first thing that popped into mind was how talented of a team they had,” Avila said.

Avila said he has no problem sharing the catching duties.

“It doesn’t really bother me,” Avila said. “It’s not like I’ve been playing 120-140 games the last few years. Teams are starting to kind of go with that as far as the catching position, kind of rotating it through two or three guys.”

He appeared in 112 games last season, playing some at first base.

“One thing that (manager) Torey (Lovullo) won’t get from me is complaining about playing time,” Avila said. “That’s just not who I am.”

General manager Mike Hazen noted that Avila gives Arizona a left-handed bat off the bench when Mathis or someone else is catching.

Avila got a deal very similar to what Iannetta got from the Rockies. Hazen said Iannetta signed before Arizona had decided on a direction for the position for 2018.

Hazen said the Diamondbacks are confident in Avila’s defensive abilities but may try to work with him on certain aspects in spring training.

Hazen praised Avila for “the type of leader, teammate, presence he has in the clubhouse, behind the plate.”

Avila ranks low on some of the defensive metrics, but he doesn’t think much of those analyses.

Avila said he talked to former Tigers teammate J.D. Martinez about the Diamondbacks. The slugger had great success in Arizona after being sent there just before last year’s trade deadline.

“He had great things to say about the city, living there, the team, the staff,” Avila said. “He enjoyed his time. He loved it.”

He said Martinez told him “Alex, these guys are hungry. They want to win.