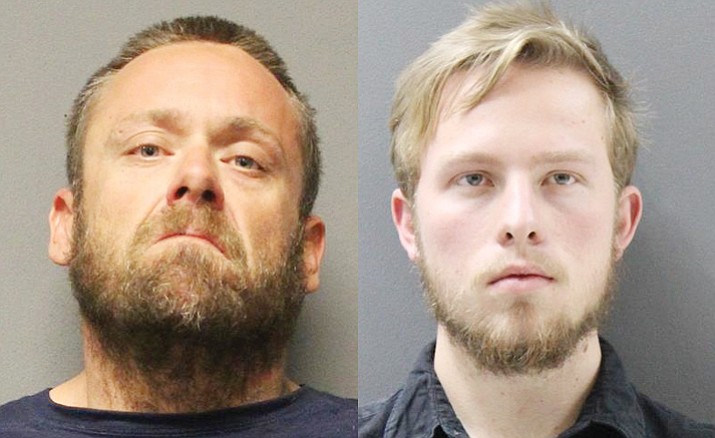 Christopher Toney, at left, and Buchanan Bleeker were arrested in a local law enforcement operation combating human tracking and prostitution in Yavapai County.

This past weekend, Jan. 27 through 28, the Yavapai County Sheriff’s Office again conducted an operation in conjunction with several area law enforcement agencies to combat human trafficking/prostitution in Yavapai County.

The operation targeted buyers who would otherwise willingly hire underage and/or adult prostitutes for sexual gratification, according to a YCSO news release. This was done by law enforcement placing a notice in an internet publication.

After two men initiated contact in response to the notice, they made arrangements to meet the supposed “prostitutes,” actually undercover law enforcement officers, in a specified Yavapai County motel room. The men knew some of the “prostitutes” were legally considered children and still intended to exploit them anyway through paid sex acts, the release states.

The two men were arrested following their request for sex acts and an offer or presentation of payment in the hotel room.

Names, details, and booking information were provided by YCSO:

Buchanan Bleeker, 18, from Flagstaff, was arrested for one felony count of engaging in child prostitution and one count of criminal impersonation after soliciting what he believed was a 16-year-old for sex. Bleeker detailed his request prior to arrival and offered a specific cash amount during the contact. He provided a false name during his arrest, eventually giving his true name when booked. He was released on a promise to appear pending court.

Christopher Toney, 37, from Colorado, was arrested for one felony count of engaging in child prostitution after soliciting what he believed was a 16-year-old for sex. Toney indicated he would offer a pure bred Blue Nose pit bull puppy as payment for the sex act, and did in fact bring this dog to the motel room where he was arrested. Toney remains in-custody on a $2,500 bond.

“I will continue to make these types of operations a priority for the Yavapai County Sheriff’s Office because the goal of protecting our children from sexual predators must continue,” said YCSO Sheriff Scott Mascher. “I would like to thank all the assisting agencies for their support and participation in the investigation. On behalf of my fellow law enforcement partners, it remains my hope these arrests send a message that preying on our children will not be tolerated in this county.”

Human trafficking is the second most prolific crime in the world, second only to narcotics trafficking in terms of revenue generated, according to the release. The victims of human trafficking are often teenage girls who, for various reasons, are forced to engage in repeated sexual assaults for the profit of a “pimp” soliciting customers for prostitutes.