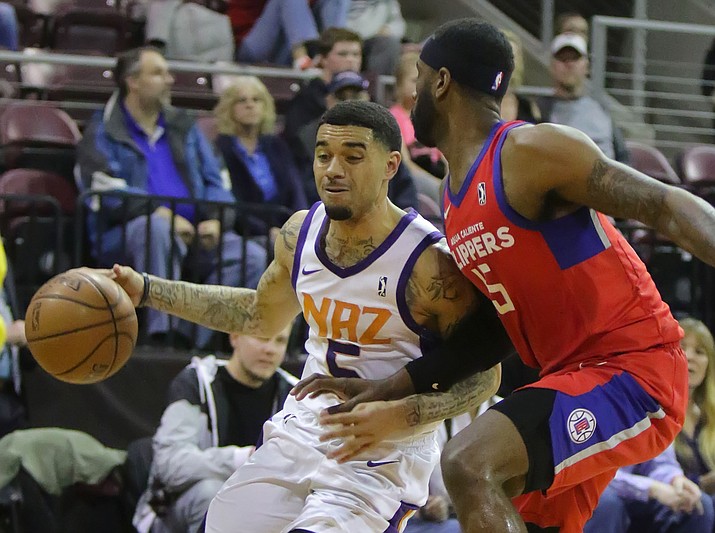 Northern Arizona’s Josh Gray (5) dribbles past an Agua Caliente defender Friday, Jan. 26, 2018, in Prescott Valley. Gray led the Suns with a career-high 32 points in a 131-110 win over the Clippers. (Matt Hinshaw/NAZ Suns)

Due to a couple of key injuries and a pair of two-way players having recently been called up to the NBA, the Agua Caliente Clippers dressed only seven guys Friday night at Prescott Valley Event Center – and the Northern Arizona Suns, perhaps as expected, pounced.

Northern Arizona concluded its three-game home stand with a 2-1 record after notching a 131-110 rout over the Agua Caliente Clippers in an NBA Gatorade League Pacific Division clash.

Suns point guard Josh Gray led all scorers with a career-high 32 points on 13 of 20 shooting (6 of 9 3-pointers), and he added five steals, eight assists and four rebounds. Four others scored in double figures for the Suns, who shot 55 percent from the field (48 of 88) and knocked down a whopping 22 3-pointers on 41 attempts.

“We made the commitment to Josh, that he was going to be our guy, and he’s just taken the ball and run with it,” said Northern Arizona coach Cody Toppert, referring to trading away former starting point guard Askia Booker in late December.

For the Clippers, neither star guard Andre Dawkins (ankle) nor Tyler Roberson (lower abdominal strain) played for Agua Caliente because of injury, and two-way players Tyrone Wallace and C.J. Williams were with the Los Angeles Clippers, temporarily trimming their G League roster from 11 to seven.

In addition to Gray, Northern Arizona forward Archie Goodwin replaced standout rookie Alec Peters in the starting lineup since Peters was traveling with the Phoenix Suns, and Goodwin sparkled. In 29 minutes, he scored 21 points and grabbed seven rebounds.

“He brings so much energy on every play, whether it’s offense or defense,” Toppert said of Goodwin.

The Suns led 40-16 at the end of the first quarter and 68-49 at halftime by shooting 57 percent from the field. Agua Caliente didn’t go down without a fight, though, trimming the Suns’ lead to under 10 on at least two occasions, as five of the Clippers’ seven players scored in double figures.

“They made a run, and we stuck together and we changed the game on the defensive side,” Gray said. “We separated ourselves by playing great defense [forcing 14 turnovers, making 10 steals] and getting it out in transition and playing our style the way we like to play.”

“It’s tough with seven guys, but the coaching staff does a great job of preparing us,” Henton said. “So, we’re going to go out there and fight, no matter how many guys we’ve got. It’s a tough group of guys in there [locker room].”

Northern Arizona finished with a 1-2 record against Agua Caliente this season. … Northern Arizona two-way player Danuel House also didn’t dress on Friday because he’s with Phoenix. … Northern Arizona owns a 6-7 record this season at the Prescott Valley Event Center, including a 5-5 mark versus Western Conference opponents. … Shooting guard Xavier Silas moved from 32nd to 31st place on the G League’s all-time leading scorers list with 2,370 points after scoring his 20 points.

Northern Arizona, which stands 4-1/2 games behind the South Bay Lakers (17-11) in the Pacific Division, turns right around and faces the second-place Reno Bighorns (17-12) tonight at 8 p.m. in Nevada.