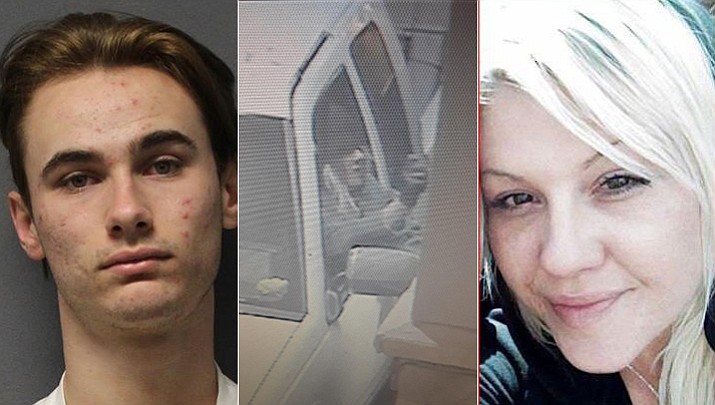 Cottonwood police announced Tuesday afternoon that they had arrested the man they believe responsible for the Sunday night attempted armed robbery of the Cottonwood Taco Bell.

He was taken into custody at a Cottonwood hotel without incident, and was booked into the Yavapai County Detention Center for armed robbery, aggravated robbery, and aggravated assault.

Another suspect, who was driving the car used in the attempted heist, remains at large, said Kuhlt. She was identified as 36-year-old Tia Lorrell Stevens, of Cottonwood.

Stevens currently has a felony warrant out of Yavapai County unrelated to the robbery. She is described as a white female who is 5 foot 6 inches tall, weighs approximately 185 pounds, and has brown eyes and blonde hair.

“Stevens’ hair color and style may be different since the robbery. If anyone has information as to Stevens’ whereabouts they are encouraged to contact Cottonwood PD at (928)649-1397 or Silent Witness at (800)932-3232,” stated a news release from the Cottonwood Police Department.

Sunday, shortly after 11 p.m., a white man with a handgun entered Taco Bell in Cottonwood through the drive-thru window attempting to rob the restaurant. No money was taken, but an employee sustained serious injuries.

According to a news release from Sgt. Monica Kuhlt of the Cottonwood Police Department, while at the drive-thru window, the Taco Bell employee handed food to the suspects when the female driver sprayed pepper spray into his face. The man in the car then crawled across the driver and through the drive-thru window. He then hit the Taco Bell employee several times on their head with the butt of his gun.

He was unable to get any money and fled back out the same window before the female drove away, according to the news release.

While officers were en route to Taco Bell, they were provided with a description of the suspect vehicle – a White 1989 Chevrolet three-quarter ton pickup truck with Arizona registration of BMK0689. An officer located the truck in the area of State Route 89A and South 12th Street. The truck fled from officers into the desert area between Cottonwood and Clarkdale into terrain the police car couldn’t travel.