‘Cord-cutters’ leaving cable and satellite
Over-the-air free TV clear in some places, not others 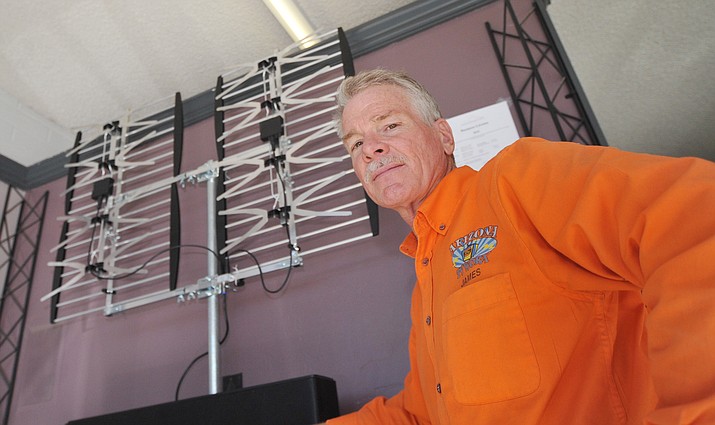 James Todd of Arizona TV Worx in Prescott is staying busy these days from “Cord Nevers” and those wanting to save money on their TV use. (Les Stukenberg/Courier)

With the trend toward so-called “cord cutting,” cable and satellite TV operators may have a legitimate worry about declining subscriber numbers.

And then there’s the incoming wave of “cord nevers,” composed primarily of millennials, who have never paid for TV, estimated at 34.4 million.

All of this is, of course, good news for over-the-air television broadcasters, who, at one point, were thought to be in trouble, in light of the burgeoning satellite and cable rosters.

And, in fact, for those connoisseurs of high-quality pictures and sound, over-the-air signals “when you’re not having to pass through any type of ‘pipe,’ like cable or satellite, you’re going to get a purer signal,” Howe said. “There’s no compression, and cable and satellite have to compress their (HD) signals to fit into their pipeline ... but with over-the-air (TV), there is none.”

Because of our terrain, the Quad Cities has something of a difficult time with traditional broadcast television reception; some homes get a clear image and some do not.

For instance, KAZT’s Mingus Mountain transmitter doesn’t reach Chino Valley well, due to a ridge that blocks the signal, said station Chief Engineer Phil Hammon, “but in general, the Prescott area and the Prescott Valley area ... do very well.”

The Phoenix stations have what are known as “translators” in the area, and the digital subchannels they transmit allow for more content.

By way of example, KAET, the PBS station, offers five channels — one is the “main” channel, and there are others called PBS Encore, PBS Kids, and World — and one is all music.

All the Phoenix TV stations broadcast at least their primary channel in high-definition.

At Arizona TV Worx in Prescott, which supplies and installs TV antennas, business is booming.

Owner James Todd said, “The price increase with CableOne … really upset a lot of people and they’re calling me in droves right now.

Most locations require an outdoor, roof-mounted antenna, although Todd said a few places have gotten away with an antenna stashed in the attic. Indoor antennas just don’t pick up enough of the relatively weak signals we receive in this area, he added.

If you don’t want regular free TV, streaming services abound; with a device like the Google Chrome (about $35) plugged into your TV, your phone can send Hulu, Netflix, and many others right to it. That includes YouTube and Google Play, which allow you to rent movies without a subscription and play them on a TV via your phone. Services like Philo offer packages of multiple channels for considerably less per month than cable or satellite, so if the channels you usually enjoy are in the package, you could stand to save hundreds of dollars over the course of a year.

There are many such services to choose from, but they all have a couple of things in common: you’ll need to have a high-speed internet connection and you’ll have to be at least a little tech-savvy to set them up and troubleshoot them.