Pair of Chinese giant pandas get snowy welcome in Finland 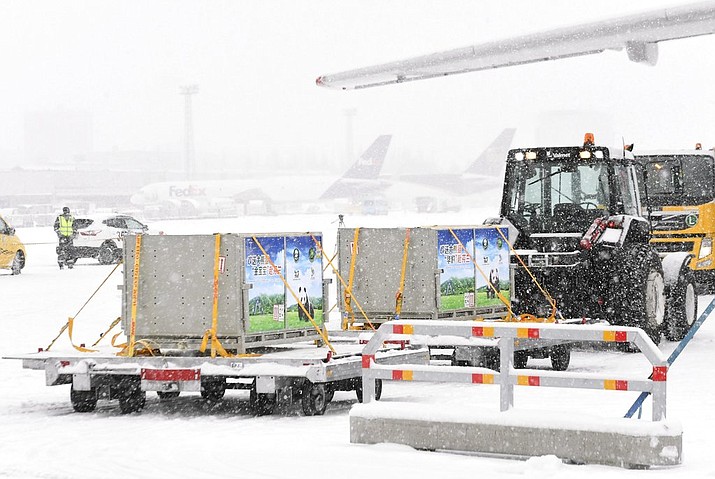 One of the two giant pandas, male Hua Bao (in Finnish Pyry) and female Jin Bao Bao (in Finnish Lumi), arriving to Finland. The bears will eventually be moved to snowy conditions into the Ahtari Zoo nature reserve in central Finland as agreed during the Helsinki visit by the Chinese President Xi Jinping in April 2017. (Markku Ulander/ Lehtikuva via AP)

HELSINKI (AP) — A pair of giant pandas has arrived in snowy Finland, China's gift to mark the small Nordic nation's 100 years of independence.

Four-year-old male panda Hua Bao and three-year old female Jin Baobao were welcomed Thursday in a ceremony at Helsinki airport attended by the Chinese ambassador to Finland and Finnish officials.

"We think this is the best gift that Chinese people can give to Finland," said Chen Li, China's ambassador to Finland, referring to Finland's 100th anniversary on Dec. 6, 2017.

The pandas have been renamed in Finnish as Pyry ("Snowfall") for the male and Lumi ("Snow") for the female.

The pandas immediately began their journey to the Ahtari Zoo nature reserve in central Finland — 330 kilometers (205 miles) north of Helsinki — amid cold wintry conditions similar to their natural environment in China's mountain areas.

The Ahtari Zoo, which specializes in typical northern European animals such as bears, lynxes and wolverines, will have the giant pandas for 15 years and has built a special Panda House annex at an estimated cost of 8 million euros ($9.8 million) in hopes of luring more tourists.

Beijing has presented pandas as a sign of goodwill and closer political ties to some 17 nations worldwide. In Europe, Austria, Britain, Belgium, France, Germany, The Netherlands and Spain currently have giant pandas.

Xi noted in Helsinki last year that Finland — a country of 5.5 million — began political ties with China in 1950.