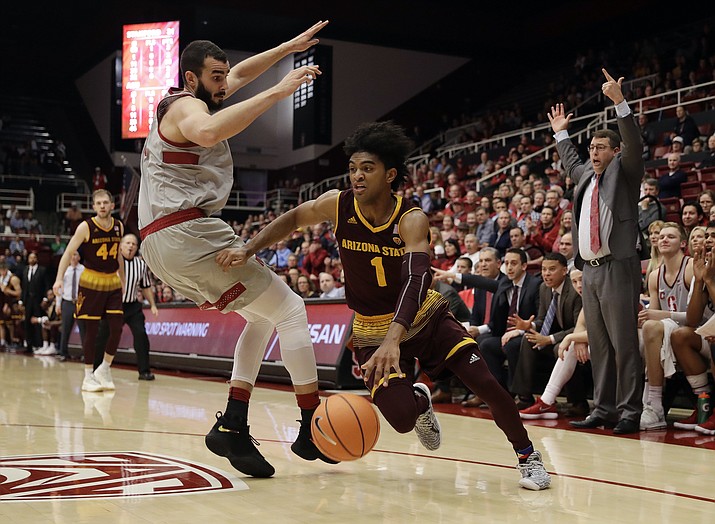 STANFORD, Calif. — Oscar Da Silva scored eight of his 14 points in the final four minutes and Stanford held on to beat No. 16 Arizona State 86-77 on Wednesday night.

Da Silva shot 4 of 6 from the foul line and made two baskets to give Stanford some breathing room.

Josh Sharma added 14 points for Stanford, which hosts Arizona on Saturday with first place in the conference at stake. Daejon Davis scored 13.

Stanford opened a double-digit lead in the first five minutes of the second half following a dunk from Sharma and led by as many as 15 at 60-45 after another dunk by Sharma.

Davis gave the Cardinal their largest lead of the first half at 31-23 following a layup with 4:30 left.

Remy Martin brought the Sun Devils even with a 3-pointer with a minute left, but Davis hit a jumper 21 seconds later, giving Stanford a 37-35 halftime lead.

Arizona State: The Sun Devils are one of six teams with at least six players who have scored 20-plus points in a game this season. ... Romello White, who averages 12 points a game, reached double figures in scoring for the second time in six conference games. ... Tra Holder averaged 20.6 in three games against the Cardinal last year.

Stanford: Reigning Pac-12 Player of the Week Daejon Davis is the first Stanford freshman to earn the honor since Brook Lopez did it 11 years ago and the fourth overall. ... The Cardinal are currently on their longest conference winning streak since the 2007-08 season. ... Stanford entered play 0-11 against nationally-ranked teams under Jarod Haase.

Stanford: Hosts No. 14 Arizona on Saturday.