All the fun of ‘The Price is Right Live!’ without the travel
Yavapai College brings experience, and prizes, of show to Prescott 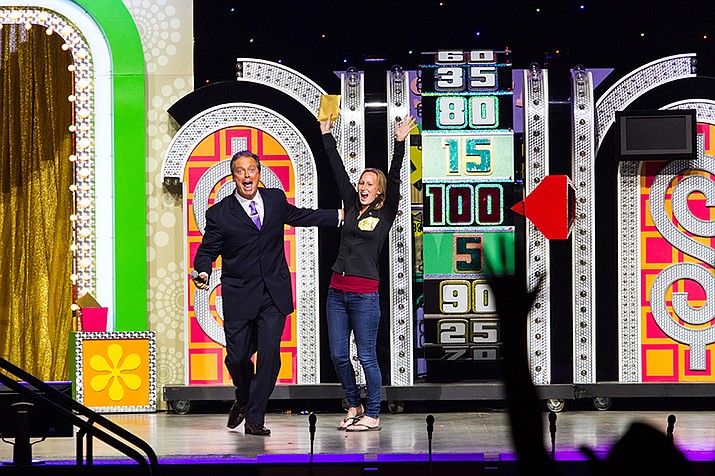 It’s safe to say, being a contestant on “The Price is Right Live!” is a once-in-a-lifetime opportunity, said host Todd Newton.

“We really want them to experience everything that ‘The Price is Right’ is about. It’s about the screaming audience members, and it’s about the lights and the music and the prizes and the games and the anticipation,” Newton said. “When you have children, all of a sudden things like Christmas and birthdays are really cool again because you’re seeing it through their eyes. I try to host the show through the eyes of the contestants. By doing that, no two shows will ever be the same because no two contestants and no two audiences will ever be the same.”

Newton has been hosting game shows for nearly 20 years and said it was something he always wanted to be. Growing up, watching the sows with his grandmother, he was influenced by a number of hosts, such as Bob Barker on “The Price is Right,” Richard Dawson on “Family Feud,” Gene Rayburn on “Match Game” and Johnny Carson, he said.

It’s very rewarding to be able to host “The Price is Right Live!” Newton said, calling it the top of the game-show mountain.

“For 46, 47 years, it’s been a part of people’s daily routines,” he said. “To be able to bring that game-show magic to them without them having to go all the way to Hollywood is something special and something that we really treasure.”

People don’t need to be ticketholders to register as contestants. To be put in the running as a contestant, those interested must register the day of the show, Friday, from 4:30 to 7:30 p.m. Registration is free, and prospective contestants must be at least 18 years of age, submit their first and last names and day of birth on registration cards along with a government-issued ID. Names will be drawn at random when registration closes. There is no advanced registration, and ticket purchases will not be considered a factor in determining eligible contestants.

Just like with the television show, contestants have the opportunity to win all the cash and prizes they’ve come to expect from “The Price is Right,” Newton said.

For contestants, whether they win or lose everything, the game is the experience, Newton said. Just being able to say they got on stage and spun the Big Wheel or played Plinko is all that matters for many, he said.

“I think, for a lot of ‘Price is Right’ fans, that in and of itself is the win,” Newton said. “It’s all about the moment, and that’s what people remember. As long as they leave with a smile on their face, I think we’ve done the show proud.”

“It’s very spontaneous,” Newton said. “I think that adds to the appeal of the stage show, as well.”