Got a drone for Christmas? Experts say new users should keep a few things in mind
Irritated? Shooting one down 'is not an option,' City Attorney says 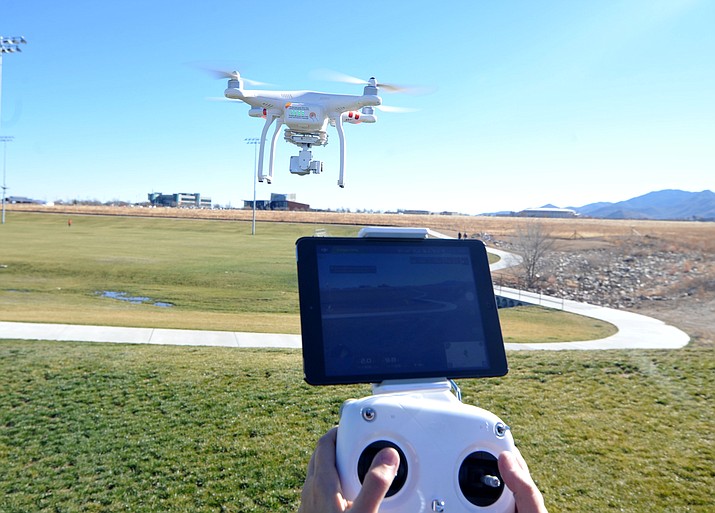 Did you get a new drone for Christmas? Know the rules before you fly. (Les Stukenberg/Courier)

5 things to know if you just got a drone

1) You need to register your drone (https://faadronezone.faa.gov/#/)

If it’s not a bird, and it’s not a plane, that buzz you hear overhead could very well be a drone.

And that trend shows no signs of slowing down. Fortune Magazine predicted recently that hobbyist sales would more than double from 1.9 million drones in 2016 to 4.3 million in 2020.

Local officials agree that drone use is definitely on the upswing in the Prescott area as well.

Sarah Nilsson, a professor at Embry-Riddle Aeronautical University and an attorney in aviation and drone law, says, “The industry is flourishing.”

Among the appeals for users, she said, is the ability to photograph scenery from above and get aerial videos, along with the drone races that take place for children.

And with that comes some responsibilities.

Nilsson pointed out that the Federal Aviation Administration (FAA) has a list of regulations for drone users.

Among the rules on the FAA website: Drones need to be registered.

According to information at (https://www.faa.gov/data_research/aviation/aerospace_forecasts/), the federal department issued a rule in December 2015 requiring all unmanned aircraft systems weighing more than 0.55 pounds and less than 55 pounds to be registered using a new online system.

Nilsson and other area experts recommend that new drone owners check out the FAA’s website (https://www.faa.gov/uas/) for the specifics.

In addition, Embry-Riddle is conducting a free online course (Massive Open Online Course, MOOC) from Jan. 22 to Feb. 4 on drone operation. Titled “Small Unmanned Aircraft Systems (sUAS): Key Concepts for New Users,” the course will explain “everything new users need to know to safely operate their drones,” according to the website for the course, https://www.facebook.com/TheDroneStoreNv/posts/797232797083578.

Among other rules for drone users: no flying within five miles of an airport or heliport; a maximum flying height of 400 feet; and no interfering with law enforcement, firefighter, or emergency services operations.

5 things to know if your neighbor just got a drone

Debbie Maneely, public affairs official for the Prescott National Forest, notes that the proliferation of aerial videos of Forest Service locations on online sites such as YouTube is an indication of the growing interest in drones.

But she cautions that especially in its Wilderness Areas, the Forest Service has strict guidelines.

The use of drones “is incompatible with preserving wilderness character,” Maneely said, adding that it “may negatively influence the natural processes of wildlife and may reduce opportunities for primitive and solitude recreation within the wilderness.”

In addition, Maneely urges drone users to be respectful of populated and noise-sensitive areas, such as campgrounds, trailheads, and visitor centers.

And noting that local officials had to deal with the impacts of a drone during last summer’s Goodwin Fire, Maneely stressed that users should avoid areas of wildfire.

She added that various government agencies have different restrictions on drone use. For instance, she said the Arizona Game and Fish has its own regulations on the use of UAS for filming wildlife and fish.

“(Drone users) need to be aware of the land they’re on,” Maneely said.

While the rules for drone users are fairly specific, the options for those who are bothered by the unmanned aircraft are less clear.

Nilsson pointed out, for instance, that the FAA regulates drone use near airports, but its rules do not extend to privacy issues.

And Prescott City Attorney Jon Paladini said an Arizona statute largely prevents local governments from passing their own laws about drone use.

“It really limits what the city can do,” Paladini said of the state law.

If a resident is being bothered by a drone, he said, “The most commonsense thing, if you know whose it is, you can go and talk to that person.”

He was adamant about one thing a resident should not do: “Shooting it down is not an option,” Paladini said, pointing out that, along with putting other people at risk, such an action would violate laws that prohibit the discharge of a firearm within one mile of another home.

Some drone use might fall into the categories of public nuisance, trespassing, or surreptitiously photographing inside a home, Paladini said, but it would depend on the details of the case. “A lot depends on what they’re doing,” he said.

And so far, Paladini said the city has not had to deal with many such complaints. “It’s not a pervasive problem,” he said.