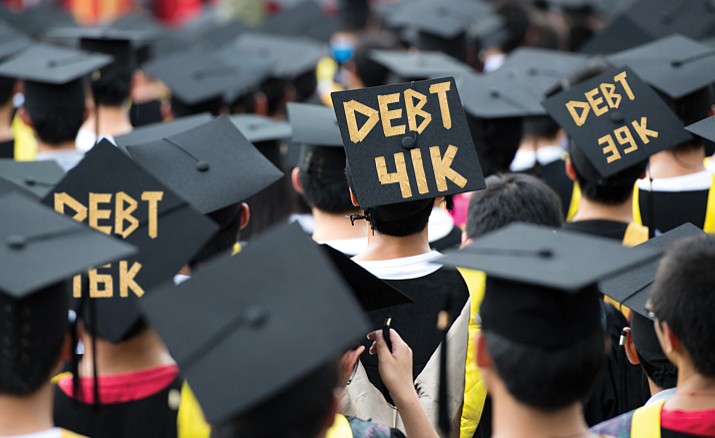 Consequences of defaulting on a student loan

“Student loans are not something you mess with,” Sandell said.

Unlike other forms of debt, federal loans do not go away even if someone files bankruptcy.

“It will sit there and haunt you until the end of time if you don’t take care of it,” Sandell said.

Some of the personal consequences of defaulting on a loan listed by Federal Student Aid — an office of the Department of Education — include:

• loss of eligibility for deferments or a repayment plan

• inability to buy or sell assets

What makes it worse is if parents co-sign for their children’s student loans, Sandell said. If the loan is determined delinquent or defaulted on, then the parent’s credit score is negatively impacted as well.

If you don’t have student loan debt yourself, there’s a good chance you know at least one person who does.

Between Oct. 1, 2013 and Sept. 30, 2016, more than 5 million people began paying off their federal student loans, according to the U.S. Department of Education.

Not all of those borrowers were young people, either.

The number of consumers age 60 and older with student loan debt has quadrupled over the past decade in the United States, and the average amount they owe has also dramatically increased, according to the Consumer Financial Protection Bureau, which examines borrower complaints.

Of the more than 5 million people, 580,671 of them — or 11.5 percent — defaulted on their loans. This is a slight increase from last year’s 11.3 percent and the first time the percentage has increased in the last five years. The point at which a federal loan enters default depends on the type of loan. For instance, a loan made under the William D. Ford Federal Direct Loan Program or the Federal Education Loan Program, a loan goes into default if the borrower doesn’t make a scheduled payment for at least 270 days, according to the Education Department.

Higher education institutions commonly track their student loan default rates closely because it can determine whether or not they are eligible to receive federal student aid. If a school has default rates above 30 percent for three consecutive years, or 40 percent for a single year, the Education Department can impose sanctions on it.

Even more affordable schools such as Yavapai College have been seeing their students struggle to pay off their loans. The college’s most recent three-year cohort default rate for student loans is as follows:

In an attempt to improve those figures, the college has partnered with Student Connections (formerly USA Funds), said Diana Dowling, Associate Dean of Student Development. The company focuses on helping students who receive loans to understand that there are options and resources to assist with financial literacy, including mobile applications for smartphones.

“Our shared goal is: absolutely no student should ever default,” Dowling said. “The more education we do upfront, the less likely students are to default.”

Why are students defaulting?

In the eyes of local finance expert Scott Sandell, a lot of the people who are now struggling to pay off their federal student debt shouldn’t have been lent the money in the first place.

“They’re getting lent money that they have no ability to pay back,” Sandell said. “I’ve seen people with $100,000 in student loan debt and they don’t have a job. So the money was given out too freely and too easily.”

Federal debt never goes away even if someone claims bankruptcy, so banks are usually more than happy to lend to students for their schooling.

“There’s no risk to the lender,” Sandell said. “At some point they’re going to get their money back.”

Embry-Riddle Aeronautical University’s Financial Aid Director Debra Hintz believes there are several other factors contributing to the issue as well.

One is the decisions students make in regard to where they attend college and what sort of degree they end of seeking.

“Some students have made sort of poor decisions,” Hintz said. “They’ve gone to an expensive school and borrowed an unusually high amount of money; which, in the end, if you’re going to be an art major, you’re probably not going to necessarily go out and secure employment that would allow you to pay back that level of debt.”

Another is a lack of proper guidance by some colleges.

And another is the simple lack of proper financial planning by students and their families.

“I don’t think families in general have saved for college and prices have escalated through the years,” Hintz said. “There are those families that have done everything and are kind of ready for it, but in general I think people seem to be under the misconception that there’s just more, free financial aid available. There are scholarships and things like that, but typically there’s not enough to cover everything. You’re going to have to have a game plan or borrow.”