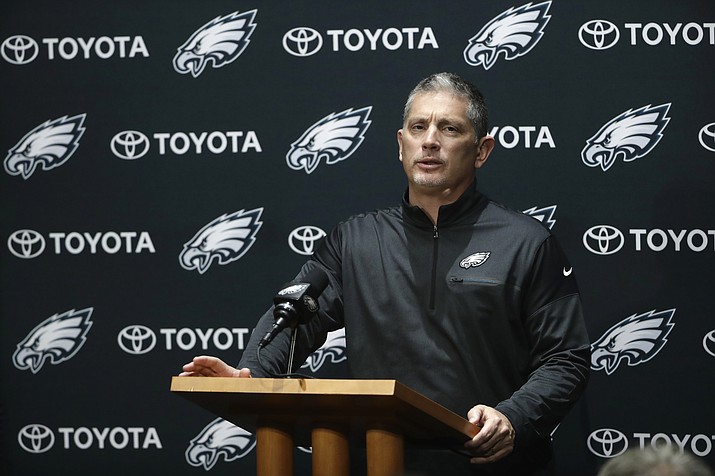 In this Dec. 12, 2017, file photo, Philadelphia Eagles defensive coordinator Jim Schwartz speaks with members of the media during a news conference at the team’s training facility in Philadelphia. (Matt Rourke/AP, File) 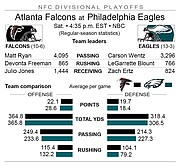 PHILADELPHIA — Atlanta’s high-flying offense had its way with every defense it faced in 2016 on the way to the Super Bowl except Jim Schwartz’s unit.

The Philadelphia Eagles shut down the Falcons in a 24-15 victory in Week 10 last season, holding them to a season low in points, first downs (11) and yards (303).

They’ll try to do it again with a berth in the NFC championship game at stake.

When the Falcons (11-6) visit the Eagles (13-3) in a divisional playoff game on Saturday, Schwartz will turn to the blueprint he used last season.

But he knows that doesn’t guarantee success again.

“They are a little bit different than last year,” Schwartz said. “It’s a new season. Playoff games stand on their own.”

Julio Jones had 10 catches for 135 yards, but didn’t score a touchdown against the Eagles in that game. Matt Ryan completed only eight passes to other receivers for 132 yards, including a 76-yard TD to Taylor Gabriel.

Schwartz doesn’t care about allowing Jones to rack up fantasy points. Keeping him out of the end zone is more important.

“If Julio Jones has 350 yards receiving and we win the game, that’s what it took to win the game,” Schwartz said.

“If he has 10 yards receiving for the game-winning touchdown, then that wasn’t enough.

“So I think you have to look at it that way. How do you stop their offense, how do you minimize their scoring and not just concentrate on one player because they do have other players that are threats. It’s not just a one-man team.”

The Eagles blitzed Ryan more than usual and the 2016 NFL MVP had his worst game of the season. He was sacked twice, threw one interception, completed only 55 percent of his passes and had a 78.7 passer rating.

Schwartz has more talent on his defense now, including more depth on the defensive line and a revamped secondary.

The Eagles often generate a strong rush without relying on the blitz and they have cornerbacks who can handle receivers one-on-one if Schwartz wants to be aggressive.

“They are a very good offensive protection team as far as picking up blitzes,” Schwartz said.

“Blitz is not a whole lot different than pass rush. You can’t expect to have guys free. If you’re expecting to get guys free, you’re in the wrong business because the only way you can really get a guy free is to bring more than they can block and there’s some risk inherent to that.

Under first-year offensive coordinator Steve Sarkisian, who replaced Kyle Shanahan after he left to coach San Francisco, the Falcons had a big drop-off in production. They went from No. 1 in scoring at 33.8 points per game to 15th at 22.1. They fell from second in yards to eighth.

“They look sharp and they’re playing at a high level,” defensive end Chris Long said. “We’ll have to bring our ‘A’ game.”