Medical marijuana found to be substitute for alcohol, study says
Is marijuana safer than alcohol? 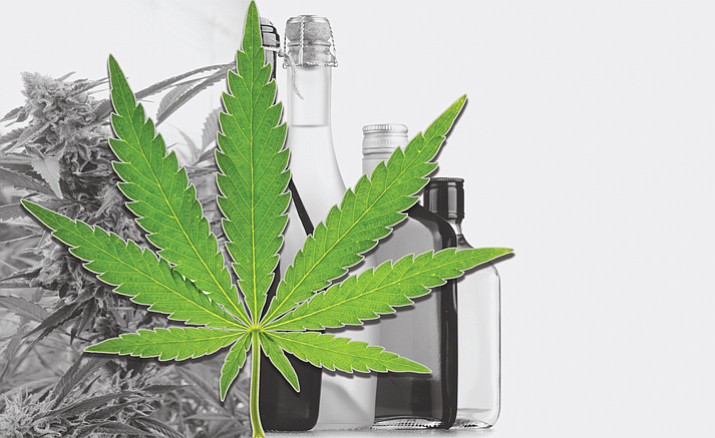 Like it or not, marijuana use is on the rise as more and more states legalize it for either recreational or medicinal use.

At last count there were more than 136,000 people who had the required doctor’s recommendation that allows them to buy up to 2 1/2 ounces of marijuana every two weeks.

This trend has lead researchers to conduct studies looking at how increased legalization of the substance has impacted such things as crime rates and traffic crashes in the United States, as well as the relationship between marijuana and other substances.

One of the most recent of these studies to be released evaluates whether or not medical marijuana serves as more of a complement or substitute for alcohol.

Previous findings on this debate have been mixed, but this recent study published by scholars at the University of Connecticut and Georgia State University paper indicates that consumers are choosing marijuana over alcohol.

To determine this, the authors used data on purchases of alcoholic beverages in over 2,000 US counties from 2006 to 2015. They found that alcohol sales in counties located in states where medical marijuana is legal dropped by 13 percent.

“We believe that the implications of our findings may be a useful contribution to economic policy not only because they provide strong evidence that can help settle the debate on the type of relationship between alcohol and marijuana, but more importantly, because they address concerns about the potential spillover effects of medical marijuana laws on use of other substances that might contribute to negative health and social outcomes as the relationship between these substances is an important public health issue,” the authors stated in the study.

Michelle Alexander, Program Director at MJ Consulting LLC, which certifies patients for medical marijuana cards, is not surprised to hear this finding.

She said a great number of the 10,000 or so patients who have visited the business since it opened 4-and-a-half years ago have specifically indicated that they use marijuana in place of alcohol.

“I would dare say as much as 60 percent are using marijuana to reduce and eliminate alcohol,” Alexander said. “It’s pretty easy for people to swap one out for the other because one makes them feel well and the other one is going to really make them hurt when they wake up the next day.”

Whether or not local liquor stores are really feeling this impact is another thing.

Max Kamen, Beer Manager at Park Plaza Liquor and Deli, a liquor store in Prescott, said he hasn’t noticed any significant shifts in consumers’ alcohol buying habits since medical marijuana was legalized in Arizona in 2010.

“It definitely hasn’t hurt us at all,” Kamen said. “From a business standpoint, I don’t see any competition.”

Legally, alcohol is clearly safer than marijuana in the current political climate. Marijuana remains a schedule I drug in the federal government’s eyes, while alcohol is legal to consume for people 21 years of age or older.

Health wise, the argument tends to flip. In small doses, alcohol has been shown to have some medicinal properties, but drink too much and it can be fatal. The CDC reports that nearly 88,000 alcohol-related deaths occur each year, with binge drinking accounting for about half of those deaths.

Conversely, the Drug Enforcement Administration states that there have been no reported overdose deaths from marijuana.

Column: Should medical marijuana be legalized? - CON
Dr. Roach: Risks and myths of marijuana use
Smoking pot vs. tobacco: What science says about lighting up
Anti-marijuana campaign says more about politicians than pot
Mayor's report: Best defense starts in the home