DPS: 2 dead, 3 injured in crash on Interstate 17 near Cordes Junction 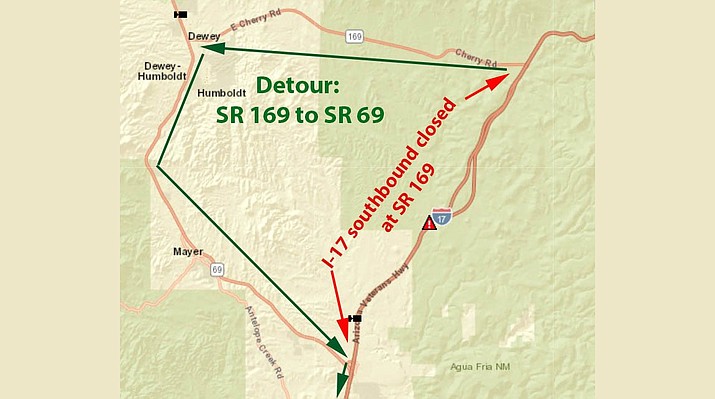 ADOT Alert: The closure of I-17 southbound at SR 169 may be an extended one due to a serious crash and law enforcement investigation Tuesday evening, Jan. 9, 2017. SR 169 west to SR 69 southbound is a detour route. Expect delays.

ADOT update 5:03 a.m.: Southbound Interstate 17 has reopened at State Route 169 after a fatal crash at milepost 270, according to the Arizona Department of Transportation.

PHOENIX - Authorities say the southbound lanes of Interstate 17 are closed at State Route 169 due to a car crash near Cordes Junction.

The Arizona Department of Public Safety said two people are dead, three other people were injured in the crash.

According to DPS, the crash involves two semi-trucks and four passengers vehicles.

Arizona Department of Transportation officials say the there's no immediate estimate yet as to when the I-17 lanes will reopen.

ADOT officials say motorists using southbound I-17 can detour on State Route 169 to State Route 69 and return to I-17 at Cordes Junction, which is about 65 miles north of Phoenix.

The northbound lanes of I-17 lanes aren't affected by the crash.

CLOSURE: The closure of I-17 southbound at SR 169 may be an extended one due to a serious crash and law enforcement investigation. SR 169 west to SR 69 southbound is a detour route. Expect delays. pic.twitter.com/ckqSMD1uig

Update: I-17 is now open; wildfire under control
Arizona in Brief: Lockdown at Arizona elementary school after apparent suicide
Both I-17 southbound lanes open south of Cordes Junction
Work continues on I-17/SR-69 bridge
I-17 reopened both north and south of Camp Verde