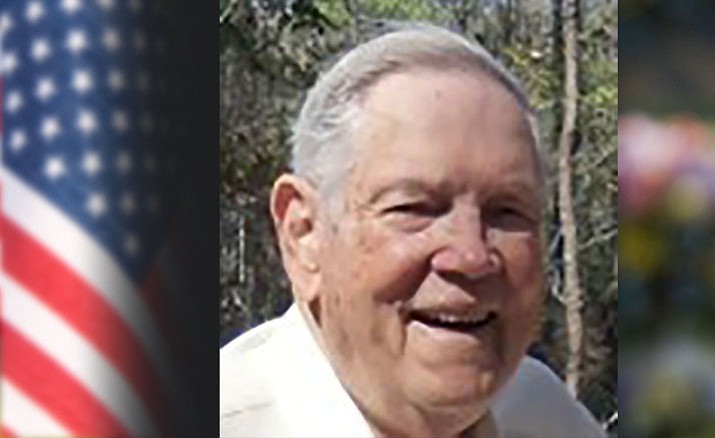 Herm joined the U.S. Marine Corps in 1951, shortly after graduation from high school. The Marine Corps sent him to Southern California where he spent the next 47 years. While in California, he worked a variety of jobs, including at Disneyland the first summer it opened, Kentucky Fried Chicken, Northrop Aircraft, and selling insurance for Pacific Mutual.

He married Lorraine Rich and they had four children while living in Orange, California. After a divorce, he later married Patricia Stegall, and moved to Placentia, California. He retired in 1992 after 23 years in the finance department of Hughes Aircraft, Corp. After retiring, Herm went to work for Mike Thompson RV doing orientations for new RV owners.

In 1998, Herm and Patricia moved to Prescott Valley. Unfortunately, Patricia had suffered a stroke earlier that year. He cared for her faithfully for 12 years and lost her in 2010. Herm was a loyal and active member of his church, a life member of the Elks Club (BPOE), and a 23-year member of the Barbershop Harmony Society. He was a member of the High Mountain Chordsmen barbershop chorus in Prescott.

His first love was his family. He also loved his friends, his church, traveling in his motorhomes, and fishing. Herm had a fantastic memory and we all enjoyed hearing tales of his travels for Hughes, his RV trips, fishing trips, and his childhood growing up in Florida.

The family would like to acknowledge the care and support provided by Hospice of the Pines for our beloved Herm. Services will be held at 10 a.m. Jan. 13, 2018, at the Elks Lodge, 6245 E. 2nd St., Prescott Valley, and at 11 a.m. at Mingus View Presbyterian Church, 8340 E. Leigh Drive, Prescott Valley.