A farmers market in the winter 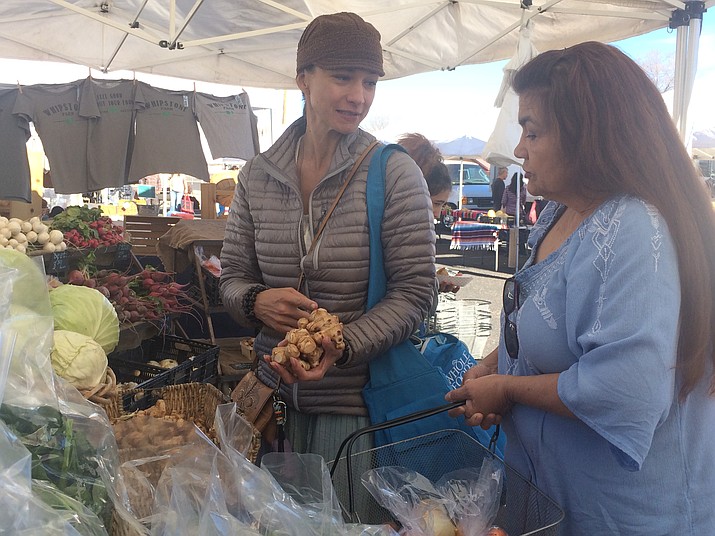 Diana Christensen and Maria Aubrey check out some sunchokes from Whipstone Farms at the Prescott Farmer’s Market on Saturday, Dec. 30. (Jason Wheeler/Kudos)

When thinking of a farmer’s market, the first idea that comes to mind probably won’t be winter – but the Prescott Farmer’s Market has had a winter market for the last four years, said Market Manager Kelley Villa.

One of the biggest differences between the summer market and the winter market is the variety of produce, Villa said. Winter vegetables include root vegetables, such as carrots and beets, and they actually taste better in the winter.

“The way the vegetable grows is that … the sugars in a root vegetable are actually protecting it from cold,” Villa said. “Carrots taste sweeter in the winter because it’s colder.”

The root vegetables do their growing before the winter and usually the tops die off, which is when they can be harvested, said Cory Rade of Whipstone Farms in Paulden. However, this winter has had nice weather, so some of the vegetables are actually still growing.

While all of the vendors at the Prescott Farmer’s Market are from Arizona, the vendors in the winter sell all year long and live within 20 minutes of the market, Villa said. Shopping at the market in the winter means buying hyper-local from producers within Yavapai County, she said.

Not only that, but the winter market sees newer items, such as baked goods and prepared foods, Villa said.

Burnin’ Daylight Farm from Chino Valley is one of those vendors, selling homemade cupcakes. Even if its prepared food, all of it has at least 10 percent Arizona-grown ingredients, whether it is the flour, eggs or milk from Shamrock Dairy Farms, she said.

Though the winter market tends to be slower as compared to summer in terms of customers, Villa said she’s encouraged and thankful for the volume of customers who do come in the winter.

“We’ve been here for the last four years and there’s so many people who have said they love the winter market more than the summer market,” she said. “We get customers that are year-round supporting our local farmers. We have such a dedicated customer base that’s growing.”

Furthermore, even though there are fewer vendors selling, there’s a great selection and the ones who do sell are diehard who come rain or shine, Villa said. As a result of a year-round market, the farmers have had to scale up, she said. Before, they were focusing only on spring planting for the summer but now, there’s multiple rounds of planting and instead of depending on summer to cover the wintertime, it helps their business be more substantial.

Whipstone Farms will bring whatever will grow and whatever’s available to the market in the winter, Rade said. There’s the root vegetables and what’s in storage, such as sweet potatoes, potatoes and squash.

“You can’t grow those this time of year, but we can store them. This year’s been good because it’s been cold but it hasn’t been cold enough to kill all the stuff off,” Rade said, noting the only days Whipstone Farms isn’t at the market is when it’s not open. “It’s what we do for a living, so we have to be here.”

In the winter, the Prescott Farmer’s Market is located at YRMC Pendleton Center, 930 Division St., and is open from 10 a.m. to 1 p.m. through Tuesday, April 24.

The Prescott Valley Farmer’s Market, also open through Tuesday, April 24, in the winter, is located in the Harkins Theatre parking lot at Glassford Hill Road and Park Avenue.

For more information about the Prescott Farmer’s Market, and to see summer hours, visit www.prescottfarmersmarket.org.