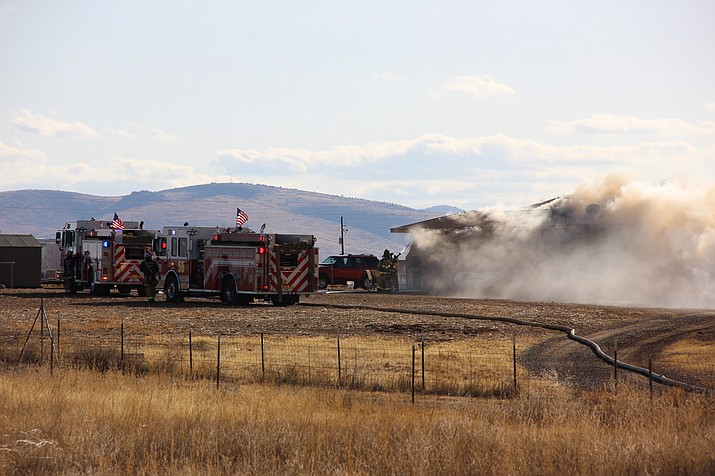 Firefighters attempt to save a home along Coyote Springs Road in Prescott Valley Thursday afternoon, Feb. 22. The fire was accidentally started by a plumber sweating copper pipes in the home’s kitchen area. (Max Efrein/Courier)

A family’s home in the Coyote Springs area of Prescott Valley received heavy damage from a fire Thursday afternoon, Feb. 22.

Central Arizona Fire and Medical Authority (CAFMA) crews responded to the fire on Mummy View Drive at about 3:30 p.m. As crews arrived they found heavy smoke coming from the eves of the residence with a fully engulfed attic fire.

The fire was accidentally started by a plumber who was sweating copper pipes in the kitchen area, according to a news release. The fire quickly moved up the interior portion of the walls and into the attic. The occupants all safely evacuated the home.

The home’s exterior walls were built out of straw hay bales with a stucco exterior and drywall interior. This made it difficult for firefighters to access all of the smoldering areas within the walls.

Firefighters spent several hours assisting the occupants in retrieving their personal belongings from the home and extinguishing hot spots and hidden fires that were contained within the walls. The last crew on the scene left at midnight.