Book Review: Author reveals who is behind books’ angry, witty narrator
“You Don’t Have to Say You Love Me,” by Sherman Alexie 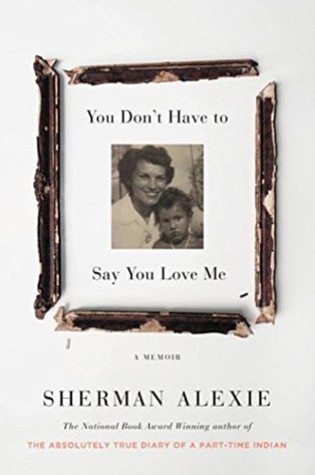 One of the most moving and revealing books I’ve read this year is Sherman Alexie’s memoir, “You Don’t Have to Say You Love Me.” It reveals the real person behind the angry, confrontational, yet insightful and extremely witty persona who narrates Alexie’s books — and sometimes causes consternation at Alexie’s public readings and talks.

In person and in all of his 26 books of poetry, short stories and novels, as well as in the three movies he has made, Alexie has prided himself on never being the Indian who people expect.

His work has won many awards, including the National Book Award for “The Absolutely True Diary of a Part-Time Indian,” another memoir of his that should not be missed.

In many ways, “You Don’t Have to Say You Love Me” takes a magnifying glass to that earlier and darkly comedic memoir, opening a view onto his life that is more heartfelt, sharing a close up of the pain and scars and shame of his early life, which went into the making of that remarkable book (and into his other wonderful works, too.)

This later memoir is even more remarkable than his first, and loss is an underlying theme. When the Grand Coulee Dam took the salmon at the heart of his tribe’s culture in 1942, they became the “unsalmon” people, a paraphrase of themselves. “When people consider the meaning of genocide,” Alexie says, “they might only think of corpses being pushed into mass graves. But a person can be genocided – can have every connection to his past severed – and live to be an old man whose rib cage is a haunted house built around his heart.”

In many ways, his mother, with whom he had a tempestuous relationship, was a repository for those cultural practices and the language that was lost. His mother was “one of the last fluent speakers of the tribal language,” he tells us. “She knew dozens of words that nobody else new. When she died, we buried all of those words with her. She knew words that had been spoken for thousands of years.”

This is a mere taste of the banquet of insight, laughter and tears Alexie offers. Don’t miss the rest.