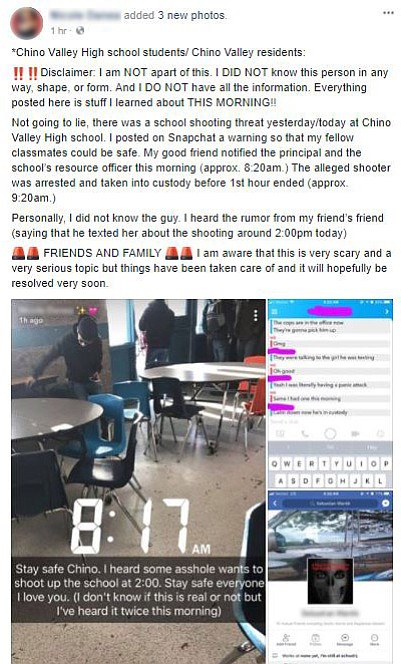 A Chino Valley High School student decided to post a warning on Facebook Wednesday morning, Feb. 21, to let peers and fellow Chino Valley residents know there was an alleged threat against the school. Police are asking that people do not make such posts in the future, for it often leads to the spread of misinformation. Instead, call the police directly so they may validate the information before sharing it with the public.

“[Chino Valley High School] had received reports from a couple students that someone was threatening to shoot up the school at 2 p.m. today,” Schaan said.

Police responded to the school and initially detained two students, but released one after finding out the student had no involvement, Schaan said. The other one, a 16-year-old Chino Valley resident who used to go to Chino Valley High School but now attends a Prescott school, is still under investigation. Prescott Police officers assisted CVPD in locating the Prescott student; where he attends school has not been released. The FBI also got in touch with CVPD after receiving a call about the potential school shooting and offered to assist in any way possible, according to the release.

During police interviews, the 16-year-old suspect admitted that more than a month ago – when he was attending Chino Valley High School – he jokingly made statements about shooting the school up and killing himself. He told police he had said this on more than one occasion, but the most recent time was “maybe a month ago.”

Police were told during interviews with other students that the threat resurfaced Tuesday evening, Feb. 21, while the suspect was talking to his ex-girlfriend over social media. He reportedly wrote to her “this is why so many things happen, 2 o’clock tomorrow.” This information, coupled with the threats he had made in the past, led some students to believe he would shoot the school up Wednesday at 2 p.m., according to the news release.

After the interviews and speaking with the suspect’s father, the suspect was referred for mental health evaluation and counseling, police said. The suspect’s phone was seized and police are searching it for any additional information. Once the investigation is over, the matter will be referred to the Yavapai County Attorney’s Office for review and potential charging.

While the investigation was being conducted, social media posts about the alleged threat were circulated by Chino Valley High School students and other community members. These led to many rumors about what was going on, Schaan said.

“A single threat has turned into a large rumored incident,” he said midday Wednesday. “Now people on social media are saying that the threats were made toward other schools, when that’s not the case.”

To put parents’ minds at ease, CVPD posted an officer at every school in Chino Valley for the entire day.

Because the matter exploded into a panicked stream of misinformation on social media, police are requesting that people contact them before spreading what may just be rumors to their friends and family.

“We just wish that if someone hears something, to report it to us instead of pass on possible hearsay or rumors furthered through social media,” Schaan said. “If they have information, call us so we can check into it and verify the validity of it before rampant rumors get spread. It’s hard to look into 50 false reports instead of one valid report.”