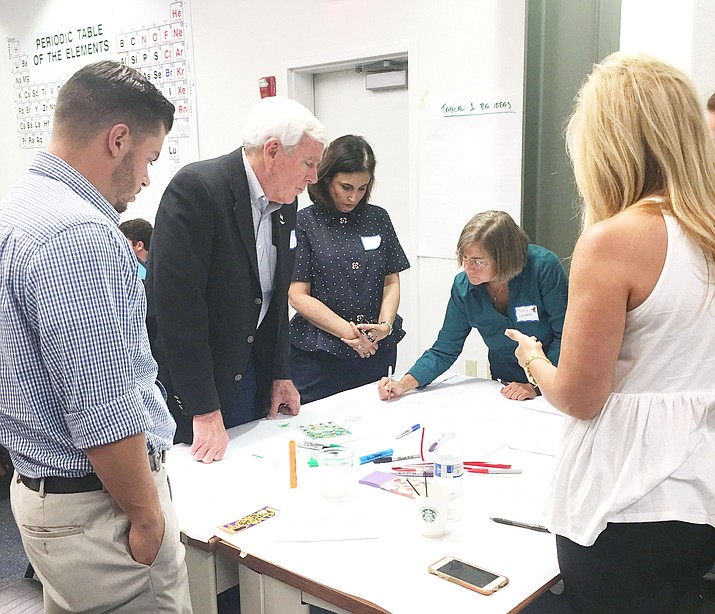 Prescott has seen its number of sober living homes decline in the past year from about 200 to a current total of 35 licensed by the city and 10 licensed through the state. Some of the reasons center on the ordinance the city adopted, which includes required training for managers. Pictured is former Mayor Harry Oberg, center left in 2016, working on the training curriculum with stakeholders.

Since new regulations on sober living homes took effect in Prescott in early 2017, the number of the homes has dropped by about 77 percent.

Although other factors were involved as well, such as stricter enforcement of claim rules by insurance companies, the city has credited its new ordinance with helping to get control of the burgeoning problem.

Now, the fate of the local ordinance is uncertain as the Arizona Legislature considers a bill that would require registration and regulation of the homes on a statewide basis.

City officials say the bill is unclear on whether it would preempt Prescott’s regulations.

Based on 2016 legislation that allowed for it, the Prescott City Council approved an ordinance, effective January 2017, that called for minimum standards on matters such as training for house managers, exit policies for residents who are asked to leave the facilities, and criminal background checks on employees.

City records show that the number of sober living homes has dropped from a high of about 200, to the current total of 35 city-licensed homes, plus 10 more that opted to be licensed through the state.

Meanwhile, the number of sober living homes in neighboring Prescott Valley, which has not imposed a similar ordinance, has jumped by about one-third during the same timeframe — from 34 before Prescott’s regulations to the current total of 56.

This week, the Legislature’s House Health Committee advanced a bill that calls for statewide licensing of sober living homes through the Arizona Department of Health Services.

The bill also would require inspections, background checks on staffers, tests for alcohol and drug use in the homes, and a “good neighbor” policy to deal with complaints of nearby residents.

The Prescott City Council heard a report on the bill Tuesday, Feb. 13, during its regular presentation on pending legislation.

City Attorney Jon Paladini said the state bill is similar to Prescott’s ordinance. “My take is (the state) used the Prescott ordinance as somewhat of a model, and addressed all of the same issues,” he said.

The wording of the bill is unclear, however, on whether it would preempt Prescott and other cities and counties in the state from having their own similar regulations.

While the City Council discussion focused on whether the city ordinance would be needed at all if the state took on the regulatory responsibility, it also touched on whether a state law would have the same level of results as Prescott’s ordinance.

“My concern is we’ve made great progress,” said Mayor Pro Tem Billie Orr, who questioned whether the state regulations would sustain that progress.

City Manager Michael Lamar suggested that the legislation could be amended to allow the state to pay the city to handle the regulations at the local level.

Paladini said he believes the bill stems, in part, from a fear in the sober-living-home industry of having “this patchwork of regulation” throughout the state.

To date, Prescott’s enforcement of the ordinance has been effective, Paladini said. “I think we’re doing fine, considering the drastic reduction we seen.”

Still, he knows of no other city, town, or county in the state that has passed a similar law to regulate sober living homes. Many are concerned about the possibility of legal challenges under the U.S. Fair Housing Act, Paladini said.

Plenty of governments are watching Prescott’s progress, though.

“I’ve talked to 15 to 20 city attorneys across the country, and probably at least that many in the state,” Paladini said, noting that the officials have reached out to him to ask about Prescott’s approach.

In Prescott Valley, Town Manager Larry Tarkowski said the Town Council has yet to consider imposing its own regulations on sober living homes. But, he added, “Is that something we could consider in the future? The answer is ‘yes.’”

Tarkowski maintains that Prescott Valley’s situation is different from Prescott’s in a number of ways.

For instance, the total of 56 homes is nowhere near Prescott’s high of 200, he said, and Prescott Valley has not seen the type of “clustering” of sober living homes that Prescott experienced in its neighborhoods.

In addition, Prescott Valley’s housing stock, which is made up of mostly two- and three-bedroom homes, is different from Prescott, where larger houses were often used for the sober living homes, Tarkowski said.

In light of the one-third increase over the past year or so, Parker said he believes that some regulatory help from the state would be welcome.

Paladini noted that the state currently regulates behavioral health facilities, which he said has been effective in the past. “The state-licensed homes haven’t been a problem anymore than the city-licensed homes,” he said.

But of the proposed bill, he said, “I think we would want the clarification; we’d want to know, ‘does it preempt our code?”

In addition, he said, the city “would want to make sure there are punishments in place (for violations of the state law).”

With the House Health Committee’s Thursday, Feb. 15 approval of the bill, it now goes to the full house for further consideration.