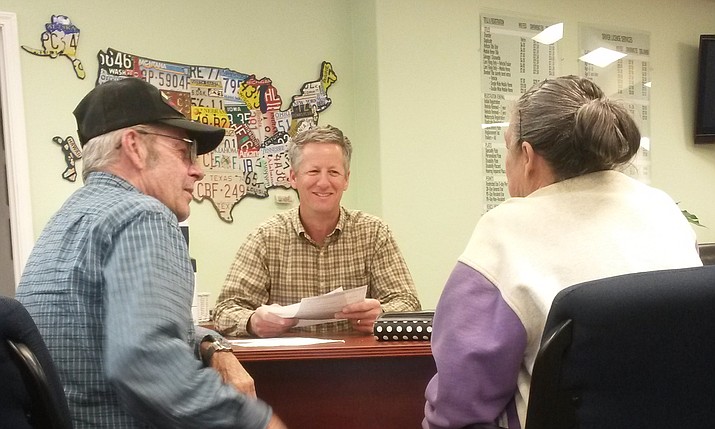 Ken Foote works with clients of Footework. The company is celebrating 20 years of helping customers get their vehicles titled and other related services. (Courtesy)

Now, FooteWork is celebrating 20 years in business, operating four third-party MVD offices in Prescott, Prescott Valley, Cottonwood and Williams, and employing a staff of more than 30.

In the beginning, FooteWork was a “title service” – meaning Ken went to people’s homes and businesses to pick up their title paperwork and took it to the MVD for them. In 1999, FooteWork was accepted into the Authorized Third Party Provider Program and opened its first office in Prescott.

The rumor that the Sam’s Club building in Prescott Valley has already been sold is not true, said Ben Hooper, economic development coordinator for the Town of Prescott Valley.

Sam Club is not sold yet. (Courier file)

“I don’t think it’s even on the market yet,” he added.

The public will have their first chance to see the newly renovated Montezuma Apartments, 226 S. Montezuma in Prescott, when they re-open as Golden Nugget Vacation Rentals, from 4 to 7 p.m. Friday, Feb. 23, for an open house.

The two former apartments have been transformed into state-of-the-art lodging, after a year of work. Also open will be Figgy’s Trading Post in the newly-renovated former Oldsmobile car dealership in back of the Golden Nugget.

Northern Arizona Pain Institute, an integrative clinic that treats chronic pain, is now offering non-surgical treatment of osteoarthritis of the knee through visco-supplementation therapy. It is a procedure involving the injection of gel-like substances into the knee joint to supplement the viscous properties of synovial fluid.