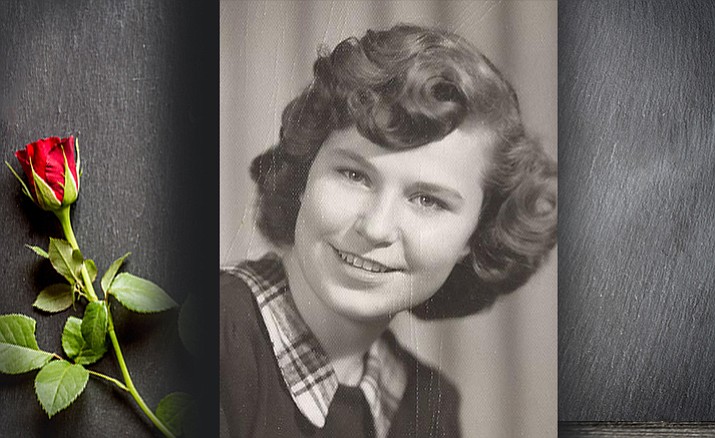 Rosalie A. Porter of Dewey, Arizona, passed away on Feb. 5, 2018. She was born on April 28, 1933, in Hays, Kansas, to Anton J. and Rose Kuhn. Rosalie was preceded in death, in October 2017, by the love of her life, James “Jimbo.” James and Rosalie were married for 67 years, and as much as she loved her family, it was difficult for her to be apart from him.

Rosalie is survived by her five children, Jacque Leerssen (Darcy) of Columbus Georgia, Ronald Porter (Kathryn) of Boise, Idaho, Craig Porter (Liz) of Tucson, Arizona, Beth Myers (Warren) and Andy (Cyndi) of Phoenix, Arizona. She was the proud grandma of 14 grandchildren and 33 great-grandchildren with two more on the way. Rosalie was the 17th of 17 children. She is survived by her sisters, Leona (Steve) Keller and Aggie Zwenger; and a brother, John (Carolyn) Kuhn, as well many nieces and nephews.

Rosalie grew up on a farm in Ellis and later moved to Pratt, Kansas. In 1950, she married James A. Porter. In 1995, they moved to Phoenix with their young family looking for new opportunities. She worked in the semi-conductor industry for most of her career, starting on the line and working her way up to a three-shift supervisor.

She lived in Ellis and Pratt in Kansas, and Phoenix, Scottsdale, Overgaard and Dewey, in Arizona. She loved to bake and was well known in the communities in which she lived for her incredible cookies and desserts. She loved to volunteer and spent her retirement with her husband, James, donating their time, resources, homemade baked and handmade goods. She volunteered for many organizations, and her three favorites were Heber/Overgaard Host, St. Vincent DePaul food bank of Prescott Valley, and Dewey Humboldt Elementary School. She loved her children and grandchildren and taught them many important life lessons: to work hard, strive to be the best, always do your best and say thank-you in words, actions and in writing.