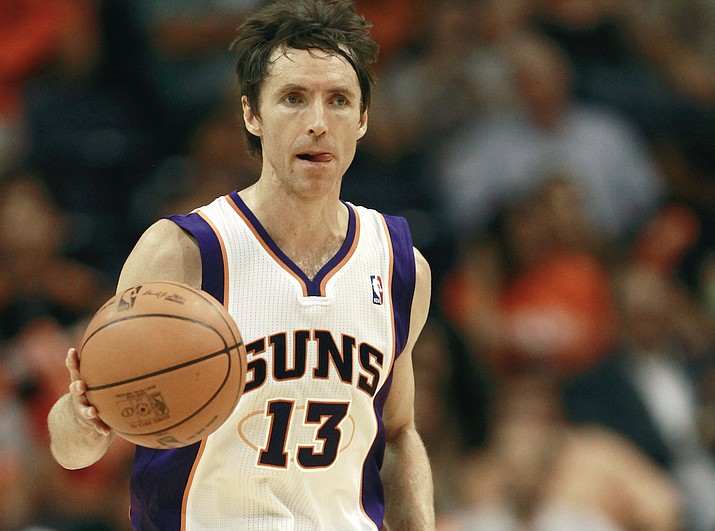 Phoenix Suns' Steve Nash (13) competes against the San Antonio Spurs during the second half of an NBA basketball game, Wednesday, April 25, 2012, in Phoenix. (Matt York/AP)

LOS ANGELES — Point guards could run the show in the next Naismith Memorial Basketball Hall of Fame class, with Jason Kidd and two-time NBA MVP Steve Nash among the 13 finalists announced Saturday morning.

Ray Allen, Grant Hill, Maurice Cheeks and Chris Webber also made the cut, but the two standout point guards are all but locks to headline the class, which will be unveiled during the NCAA Final Four in San Antonio.

Nash won back-to-back MVP awards in 2005 and 2006 with the Phoenix Suns. He made the All-NBA first team three times during his 18-year career with the Suns, Dallas Mavericks and Los Angeles Lakers and helped kickstart the development of the sport in Canada with his freewheeling style. Nash was also a two-time WCC player of the year in 1995-96 at Santa Clara and engineered a memorable upset of second-seeded Arizona in the NCAA Tournament.

Kidd was the 1994-95 NBA rookie of the year, setting the stage for a 19-year career in which he made the All-NBA first team five times and All-Defensive first team four times. Kidd won an NBA title with the Dallas Mavericks in 2011 and is second all-time with 2,684 steals. He also was named Pac-10 freshman of the year in 1993 and Pac-10 player of the year in 1994 during his two seasons at California, and won gold medals with the U.S. in Sydney Olympics in 2000 and Beijing Olympics in 2008.

James Worthy, the standout Lakers forward who was inducted into the Hall of Fame in 2003, saw plenty of both Kidd and Nash as a television analyst. Worthy thinks it would be fitting for Kidd and Nash to be inducted in the same class.

"Enhancers of the game, and made everyone else better than they probably were," Worthy said. "Jason Kidd had a flair that was like Magic Johnson, he just had angles. And Steve Nash was the same way."

There are other strong contenders outside of Kidd and Nash, with Hill's college success and Allen's prolific shooting marking the strongest arguments for each of their respective candidacies.

Allen's 2,973 three-pointers made are the most in NBA history. He won NBA titles with the Boston Celtics in 2008 and Miami Heat in 2013, memorably sending Game 6 to overtime on a tying 3-pointer with 5.2 seconds left in regulation.

Hill was a two-time national champion and two-time All-American at Duke, but injuries kept him from reaching the same heights in the NBA during his 19-year career.

Driesell took four different schools to the NCAA Tournament and won two ACC Tournament titles at Maryland. Tomjanovich led the Houston Rockets to consecutive NBA titles in 1994-95. Mulkey won an NCAA title as a player at Louisiana Tech and two more as the coach of the Bears.

In addition to the finalists, Andy Bernstein and Doris Burke were named recipients of the 2018 Curt Gowdy media award

Finalists must receive 18 votes from the 24-member honors committee to be enshrined.

The entire class will be unveiled during the NCAA Final Four in San Antonio.