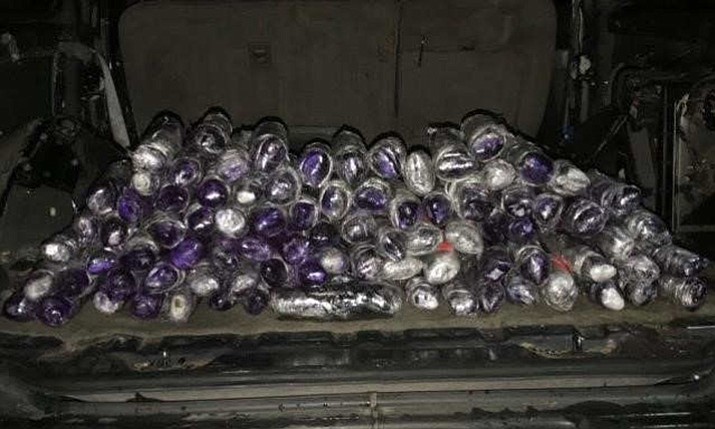 Border authorities in Arizona say they arrested six people Friday involved in attempts to smuggle more than 200 pounds of methamphetamine and cocaine into the United States. Pictured above, officers seized 96 pounds of meth hidden throughout one of the drug smuggling vehicles. (U.S. Customs and Border Protection)

NOGALES, Ariz. (AP) — Border authorities in Arizona say they have arrested six people involved in attempts to smuggle a total of more than 200 pounds (90 kilograms) of methamphetamine and cocaine into the United States.

The U.S. Customs and Border Protection on Friday detailed six different arrests of people on Thursday after specially trained dogs alerted agents to drugs in the vehicles they were trying to drive across the U.S.-Mexico border at Nogales.

Authorities say those arrested included a 33-year-old Mexican woman, who had more than 17 pounds (7.7 kilograms) of cocaine worth over $196,000 and more than five pounds (2.2 kilograms) of methamphetamine worth nearly $16,000 hidden in her truck's center console.

The other five people included men and women, Americans and Mexicans, all 35 or younger.