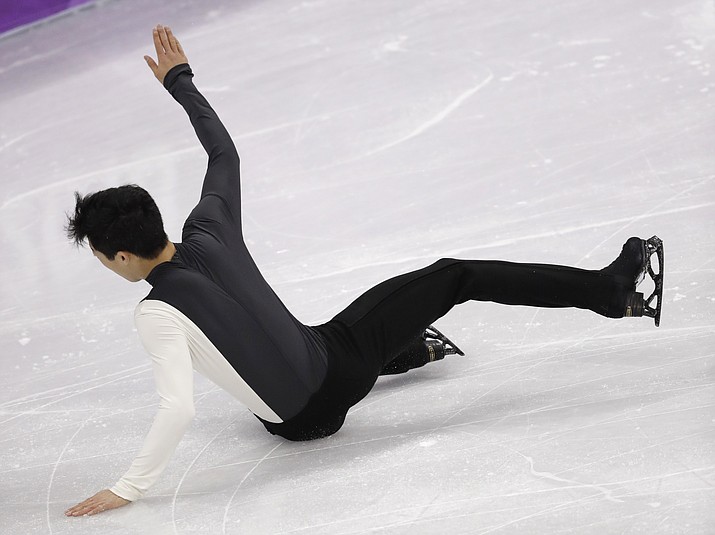 Nathan Chen of the United States falls while performing in the men's short program figure skating in the Gangneung Ice Arena at the 2018 Winter Olympics in Gangneung, South Korea on Friday, Feb. 16, 2018. (Bernat Armangue/AP)

EDITOR'S NOTE: This story has been updated from an earlier version to reflect the current medal count as of 9:30 p.m. Arizona time, Friday.

PYEONGCHANG, South Korea — It was a rough day in Pyeongchang for Mikaela Shiffrin and Nathan Chen.

The 22-year-old Shiffrin finished fourth in the women's Olympic slalom on Friday, failing to win her second medal in as many days. She won gold in the giant slalom on Thursday.

The fourth-place showing was a surprise considering the American standout won the Olympic slalom title four years ago in Sochi when she was only 18.

Shiffrin struggled to describe what happened and why she wasn't attacking the course more.

"I've been skiing aggressively in slalom all season long. I've been confident, comfortable," Shiffrin said. "Coming here and skiing the way I did, really conservative, was a huge disappointment. ... That's how life goes."

Frida Hansdotter of Sweden won gold with a combined time of 1 minute, 38.63 seconds.

In figure skating, Chen was anything but spot-on in the men's short program. The two-time U.S. champion missed on all his jumps, plummeting to 17th place with a tentative and passionless showing.

"I've never been in this spot before," Chen said. "I mean, I thought I did everything right in terms of my general approach going into this. Things just didn't click together."

Yuzuru Hanyu of Japan set an Olympic record with 111.68 points and is more than four points ahead of Spain's Javier Fernandez, who is in second. American skater Adam Rippon is in seventh.

The men's free skating competition is on Saturday.

A pair of college players was instrumental in helping the United States secure an important 2-1 win over Slovakia in the preliminary round.

Ryan Donato scored two power-play goals and Troy Terry dominated with his speed. They are two of four NCAA players on the no-NHL Olympic roster.

"Life comes at you fast," Donato said. "Coming in I don't know if I saw myself in that role, but now that I'm here and kind of in that role, it's building up guys like me, Troy and Jordan, our confidence, and hopefully it'll continue to grow and hopefully help the team in a more major, impactful way."

Goalie Ryan Zapolski made 21 saves for his first Olympic victory, which is crucial considering only the top four of 12 teams avoid the qualification round Monday. The regulation win means the U.S. vaults to the top of Group B with four points. Slovakia was second with three, followed by Slovenia and Russia.

Matthias Mayer broke Norway's 16-year grip on the men's Olympic super-G title with his victory on another near-perfect clear and cold day for Alpine racing.

The Austrian skier won the speed race by 0.13 seconds over Beat Feuz of Switzerland, who added the silver medal to his bronze from downhill a day earlier.

Yun Sungbin of South Korea earned a dominant win in men's skeleton with a four-run time of 3 minutes, 20.55 seconds — a staggering 1.63 seconds ahead of silver medalist Nikita Tregubov of Russia.

The 23-year-old Yun said he felt no pressure to win, even with his home country hosting the Olympics.

"There was no reason to feel any pressure," Yun said. "I mean, it's my home track. So I can really feel at home here. And I think that I always believed it would come out greatly if I do the same things I've always done."

Jacobellis placed fourth, continuing her hard-luck career at the Olympics . The sport's most decorated rider, Jacobellis has failed to return to the podium since settling for silver after an ill-advised jump in 2006 while she was clear in the lead.

— Dario Cologna of Switzerland became the first cross-country skier to win three Olympic gold medals in the same event by capturing the 15-kilometer freestyle. "Super Dario," as he's known, also won this race in Vancouver in 2010 and Sochi in 2014. The win also gave Switzerland its first gold medal of the Pyeongchang Olympics.

— Hanna Huskova edged Zhang Xin to give Belarus its second gold medal in women's aerials . The 25-year-old Huskova posted a score of 96.14 in the final round of jumping, just ahead of Zhang's 95.52. Kong Fanyu took bronze in a sloppy last round, giving China two medals. Huskova and Zhang were the only two women in the six-person final to land their jumps cleanly.