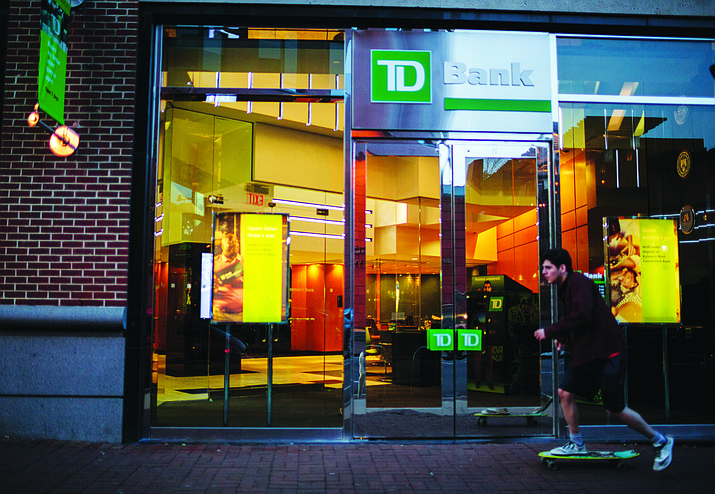 This Nov. 12, 2017, photo shows a TD Bank storefront in Philadelphia. African American and Latino borrowers are more likely to get turned down by TD Bank than by any other major mortgage lender. The bank turned down 54 percent of African American homebuyers and 45 percent of Latino homebuyers, more than three times the industry averages. (Sarah Blesener/Reveal via AP)

Across America, a troubling pattern emerges in data analyzed by Reveal from The Center for Investigative Reporting — nearly two-thirds of mortgage lenders denied home loans for people of color at higher rates than for white people.

But among the 6,600 U.S. lenders, some banks stood out for particularly extreme practices. And some of America’s biggest banks had the worst track records in terms of racial discrimination in home loans. (Note: Unless otherwise specified, all figures below rely on publicly available Home Mortgage Disclosure Act data and reflect conventional home purchase lending in 2015 and 2016.)

Among banks that took in more than 10,000 conventional loan applications in 2015 and 2016, TD Bank and Capital One were the most likely to reject applications submitted by members of racial minorities.

African American and Latino borrowers are more likely to get turned down by TD Bank than by any other major mortgage lender. The bank turned down 54 percent of black homebuyers and 45 percent of Latino homebuyers, more than three times the industry averages.

TD Bank declined to discuss its lending practices with Reveal. Bank spokeswoman Judith Schmidt sent a statement, saying the bank “makes credit decisions based on each customer’s credit profile, not on factors such as race and ethnicity.”

She noted that in TD Bank’s internal review of its lending patterns, after taking into account creditworthiness, its African American and Latino applicants were no more likely to be denied loans than white applicants.

Capital One exited the home mortgage market in 2017. In the years before, it took in a higher proportion of mortgage applications from people of color than most of its competitors. But when African Americans approached Capital One to buy a home, they were more likely to get turned down than get a loan. Latino applicants fared slightly better. They were rejected 31 percent of the time, the third-highest rate among major lenders.

In an email, Capital One spokeswoman Tatiana Stead said the company “either exceeds or is in line with industry benchmarks” when it comes to serving people of color and minority neighborhoods.

“We have and will continue (to) work to ensure that Capital One’s lending standards and our commitment to fair banking practices are maintained across all of our banking operations,” she said.

The economic recovery has been marked by the rise of mortgage lenders, which, unlike banks, are not required to follow Community Reinvestment Act rules to lend to low-income borrowers and to make home loans in blighted communities.

Since the housing bust, family-owned Ruoff Home Mortgage has originated the most loans in Indiana and is one of the fastest-growing mortgage lenders in the country.

Although its biggest market was Indianapolis, with a large African American community, the company made 92 percent of its 5,300 conventional home loans to whites in 2015 and 2016.

A spokeswoman for the company did not respond to two emails and a voicemail requesting comment.

Located in The Villages, a retirement community halfway between Gainesville and Orlando, Citizens First is one of the largest lenders in America to cater almost exclusively to whites. Federal lending documents show 97 percent of the home loans this company made in 2015 and 2016 were to whites.

A Citizens First official did not respond to a voicemail and two emails requesting comment.

The Community Reinvestment Act allows banks to draw lines on maps to define “assessment areas,” where regulators should scrutinize their lending. Some of those that lend almost entirely to whites drew service areas that excluded neighborhoods where large numbers of people of color live.

The St. Louis metro area is racially diverse, home to more than 500,000 African Americans. But over two years, none of the 324 home loans made by First National Bank in Staunton went to an African American or Latino applicant. And all nine of the bank’s branches are in neighborhoods of the metro area that are at least 89 percent white.

A First National official did not respond to two emails and a voicemail requesting comment.

Like St. Louis, Pittsburgh is a racially diverse city with a large population of African Americans, but First Federal Savings and Loan doesn’t serve them. Its branches all are in majority-white neighborhoods. Of the 554 conventional mortgages it issued in 2015 and 2016, 99 percent went to whites.

Like First National Bank in Staunton, Illinois, First Federal Savings and Loan crafted an assessment area under the Community Reinvestment Act that includes overwhelmingly white suburban and rural counties, but stops at the Allegheny County line, where large numbers of people of color live.

In a letter to Reveal, the company’s president and chief executive, Judi Goodwin Tanner, said that wasn’t a problem: “While this statistic alone might certainly be used to attempt to cast First Federal in a negative light,” she said, federal regulators had found “no evidence of discriminatory or other illegal credit practices.”

In her letter, Tanner stated that the county where the bank is headquartered is 94.8 percent white.

The letter said the bank had approved nearly all nonwhite applicants who sought a residential mortgage.

“A foundation of integrity and trust”

A week before Obama left office, the Justice Department sued KleinBank, accusing it of unlawful redlining of majority-minority neighborhoods in the Minneapolis area. Federal lending data shows the bank made one loan to an African American and six to Latinos in 2015 and 2016, out of 585 total. In its lawsuit, the Justice Department cited KleinBank’s self-designated Community Reinvestment Act service area, a horseshoe around sections of the Twin Cities metro area where large numbers of people of color live. KleinBank is defending itself by citing its most recent satisfactory Community Reinvestment Act review from the federal Office of the Comptroller of the Currency.

“My comments are already in the public domain and on the public record, so I’d suggest you follow those,” Doug Hile, the bank’s president and chief executive, said before hanging up the phone.

In May 2015, the U.S. Department of Housing and Urban Development reached a $200 million fair lending settlement with Associated Bank, a major regional holding company. The company’s two largest markets are the racially diverse cities of Chicago and Milwaukee, but in 2014, the year before its settlement with HUD, 92 percent of the company’s conventional mortgage loans went to whites. By the end of 2016, the bank had improved but still made 32 times as many loans to white homebuyers as African American ones. In Chicago, it had a whiter borrower profile than any major bank in the area.

A spokeswoman for Associated Bank did not respond to a voicemail and two emails requesting comment.

Legal loophole leads to neighborhood gentrification
For homebuyers, mortgages are safer but tougher to come by
How parents can help their grown kids own a home
Black homeowners struggle as US housing market recovers
Bank of America transforms homebuying with new digital mortgage experience