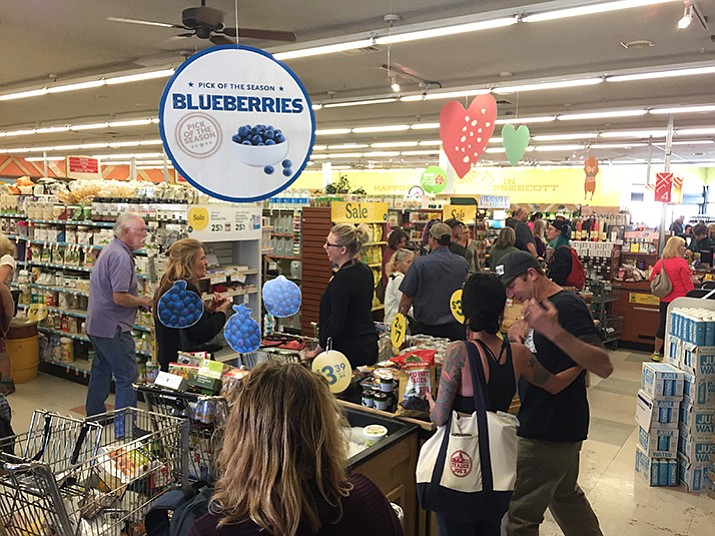 Grocery shoppers line up at the Whole Foods Market in Prescott on Wednesday, Feb. 8, 2017, during the store’s liquidation sale.

• NOT FAKE – It may not have been “fake news,” it certainly was wrong and I laughed out loud anyway.

I am referring to a Google alert I received this week stating: “Amazon kicks off free 2-hour Whole Foods delivery service.” In the alert it had that “the service, which said it can deliver within an hour, will begin deliveries in Prescott, Prescott Valley, Chino Valley, Yavapai Hills, Groom Creek, Wildwood Estates, and Iron Springs, as well as Camp Verde, Cottonwood, Cornville, and Montezuma, and Cherry, according to a news release.”

Not so fast. Folks, Whole Foods in Prescott closed in February 2017.

Of course, you wouldn’t know that from Google – which still lists 1112 Iron Springs Road as the local location. (It does list a market but not by that name in Cottonwood as well.)

This is the new Instacart venture you may have heard about. The Courier reported on it Feb. 4 as beginning in the Quad Cities on Feb. 8. At a minimum it includes Sprouts, Safeway, Costco, Natural Grocers, and CVS.

Yes, we have all of those.

Should be interesting – and a game-changer.

• SNOW! – In the spirit of the Winter Olympics I mention that Snowbowl ski area in Flagstaff received 6 inches of snowfall in 24 hours, as of Thursday morning.

That brings its total to 15 inches since Monday, according to an email from the resort, with 100 percent of lifts turning.

I grew up snow skiing in Colorado, practically every weekend from age 3 to 23. There, at least, it has become what I call a rich-man’s sport.

Consider that lift ticket prices are astronomical – Loveland was $7 when I skied there, now $75 (adults – weekdays; weekends are more); and Copper Mountain and Winter Park (two of my favorites) were $20-ish back in the day, now $150 and $159, respectively (weekdays). The most expensive? Vail and Beaver Creek for $189 (weekdays).

And those are online “deals.”

And those prices do not include the ski rental.

• FLAGS AT HALF-STAFF – Wonder why so many flags are at half-staff?

Well, the worst school shooting since Newtown, Connecticut, happened this week in Florida.

Not that we’re counting, but 26 people (including 20 elementary school children) died at Sandy Hook school in December 2012. At last count 17 total died Wednesday at a high school in Parkland, Florida.

“Our hearts and prayers go out to the victims and everyone impacted by this horrific tragedy,” said Gov. Doug Ducey in ordering flags lowered.

Flags at all state buildings (and elsewhere) will be lowered to half-staff until sunset on Monday, Feb. 19.

• GET RIGHT – This just in: state lawmakers voted Thursday to spend more than $177,000 to tell drivers to get the heck out of the fast lane, according to Capitol Media Services.

State law already spells out that motorists must drive on the right half of the road unless passing someone going in the same direction.

Tell me, do we really have to spend money to educate people on respect and what they should do anyway?!

Right. Thanks, that’s what I thought too.

• PICK OF THE WEEK – (Proving there’s always something good to do in the Prescott area that’s cheap or free): Tumbledown House returns to Prescott at 7 p.m. Saturday, Feb. 17, at the Elks Theatre, 117 E Gurley St. I hear they’re really good! www.prescottelkstheater.com.

Tim Wiederaenders is the senior editor for The Daily Courier and Prescott Newspapers, Inc. Follow him on Twitter @TWieds_editor. Reach him at 928-445-3333, ext. 2032, or twieds@prescottaz.com.