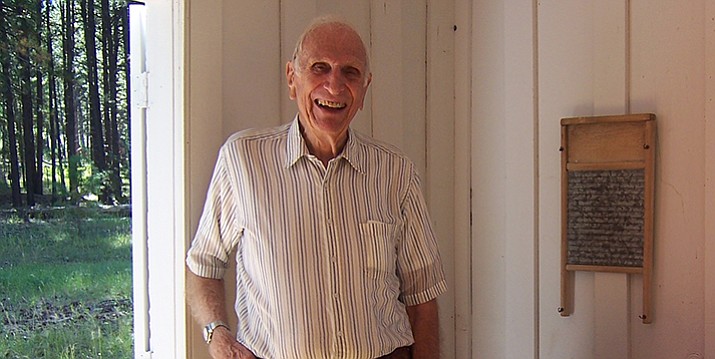 In loving memory of Ed Voelker, of Tucson, Arizona, who passed away on Jan. 30, 2018, after a short illness. He is survived by his wife of 66 years, Louise; his daughter, Elaine (and husband Chris) Conway of Lille, France; his daughter, Ruth (and husband John) Curtis of Tucson; his granddaughters, Lisa, Charlene and Michelle Curtis and Dana Demos-Curtis; and his great-grandsons, Mason and Domonic Campbell, and Logan Pharis.

Ed was born in Los Angeles, California, on Nov. 18, 1926. He graduated from University High School in 1944 and began working as a land surveyor shortly thereafter, in order to be able to spend time in his beloved wilderness. He met Louise in Boulder City, Nevada, while working for the United States Geological Survey, and they were married in 1951. He studied and became a civil engineer, specializing in hydrology. He held certifications as a Professional Engineer and Land Surveyor in six states, and was a member in good standing of the American Society of Civil Engineers.

He worked for the State of California, the City of Flagstaff, Arizona, other municipalities in Arizona and California, and various private engineering firms until his retirement. He and Louise then moved to Prescott, Arizona, and enjoyed 25 years of friends and their church family at Trinity Presbyterian. Just four years ago they moved to Tucson to be near their older daughter and her family.

Ed enjoyed hunting, camping, hiking, square dancing, and the company of his family. He was an active participant in his church, serving as an elder and a deacon over the course of his life, and he always sang in the church choir.

Donations to honor his memory may be sent to the Music Department of Trinity Presbyterian Church in Prescott, Arizona; or to The Nature Conservancy (www.nature.org).

Memorial services will be held later in Tucson and in Prescott; burial will be in the Flagstaff Citizens’ Cemetery.