The Latest: Trump pushes for more Republicans in Congress 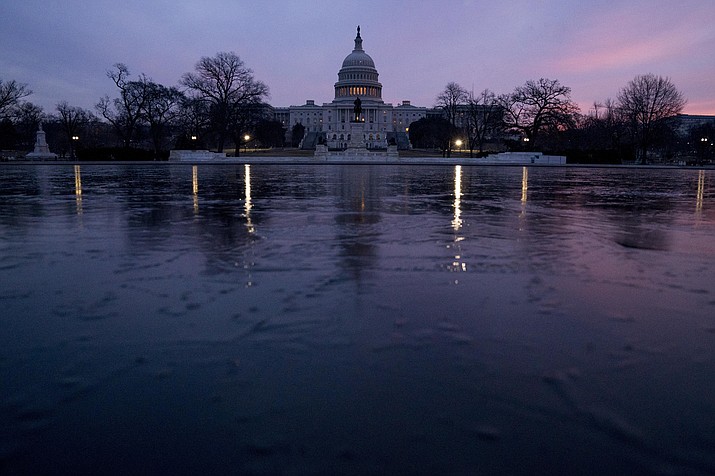 The Capitol Dome of the Capitol Building at sunrise, Friday, Feb. 9, 2018, in Washington. After another government shutdown, congress has passed a sweeping long term spending bill which President Donald Trump is expected to sign later this morning. (AP Photo/Andrew Harnik)

House Debate Ahead of Budget Vote by Associated Press

WASHINGTON (AP) — The Latest on Congress and spending legislation (all times local):

President Donald Trump is making the case on Twitter for electing more Republicans to Congress after signing a $400 billion spending plan.

He calls the spending plan a "BIG VICTORY for our Military, but much waste in order to get Dem votes."

He is pointing to upcoming talks on immigration, writing, "Fortunately, DACA not included in this Bill, negotiations to start now!"

Trump's tweets came after Republican Sen. Rand Paul of Kentucky blocked plans for a quick Senate vote because of his spending concerns.

Trump tweets, "Just signed Bill. Our Military will now be stronger than ever before. We love and need our Military and gave them everything — and more. First time this has happened in a long time. Also means JOBS, JOBS, JOBS!"

The House narrowly passed the budget accord in the pre-dawn hours, ending a brief government shutdown and clearing a path for huge spending increases for both the Pentagon and domestic programs.

Passage came over the objections Democratic leaders who demanded the promise of a vote to protect "Dreamer" immigrants brought to the country illegally as children.

A band of tea party Republicans swung against the legislation as well, repelled by its spiraling spending levels.

The government shut down at midnight Thursday after Kentucky GOP Sen. Rand Paul blocked plans for a quick Senate vote, blaming his fellow Republicans for being "complicit" in the looming return of trillion-dollar budget deficits.

The Senate has passed a massive, bipartisan budget agreement and spending bill to reopen the shuttered federal government.

The bill now moves to the House.

The bill stalled in the Senate Thursday night when one of the opponents, Sen. Rand Paul, refused to allow a speedy vote.

Paul's protest forced Congress to miss a midnight deadline for passing a funding measure to keep the government operating.