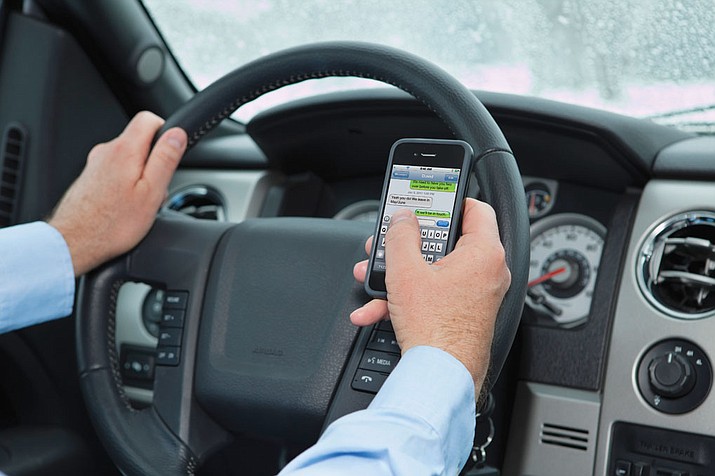 Our state lawmakers are considering a bill that would make it illegal to text while driving. We have written editorials calling for that at least 10 times.

It appears that this year it has a chance of actually passing and being signed into law, but to get to that point its backers had to water it down to the point it may not be as effective as it could have been.

Prescott Republican Sen. Karen Fann and other supporters of the ban are no doubt hoping to improve it later, but after years of getting nowhere with this bill, they are trying to get something on the books. Despite this bill’s flaws, it seems a smart strategy.

As currently written the bill would fine a first-time offender $99 and $200 for subsequent violations. The texting while driving must be witnessed by a law enforcement officer or established by other evidence, say if you’re in an accident, court-ordered phone records.

If someone texts and drive and causes an accident that results in serious injury or death, the maximum penalty they could face under this law is four months in jail and a $4,000 fine (though the driver could be cited for other violations such as reckless driving and manslaughter, and face additional penalties).

Fines in other states for texting while driving range from $20 to $500 and repeat offenders can face criminal charges.

Under the proposed bill texting while driving would be a misdemeanor and the Motor Vehicle Department cannot take away your license no matter how many times you’ve been cited for violating the law.

Here is a challenge we see with the current proposal: It appears a driver can refuse to show a law enforcement officer their phone if stopped for a texting while driving. They can also claim that they were not texting, but using an app, say a GPS-map application that was giving them directions, which is an exception under SB 1261.

In that case, there may not be a citation unless there is a process similar to when a driver refuses a breathalyzer test with DUI infractions.

There may be a few honest people who will admit to texting while driving, but we fear a great many people who know of this potential loophole will use it.

We want to respect the privacy of citizens of this state. We also want to keep our roads safe so that the people we love get home safely each night. Finding that balance is a challenge.

This bill could be improved by allowing MVD to suspend the licenses of repeat offenders; banning any hand-held use of the phone (hands-free would be permitted); and enforcing serious consequences if an accident caused by texting while driving results in serious injury or death.

All of these would be a stronger deterrent to curtail the number of violators. While the bill might not be perfect, we recognize political realities, and passing any ban is at least a step in the right direction.