Yavapai County is decriminalizing mental illness
Sheriff: 'This is the right thing to do for Yavapai County and our communities.' 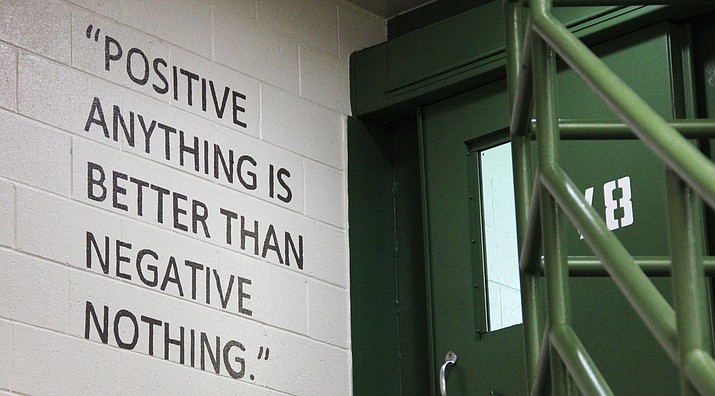 Wherever he went, Yavapai County Sheriff Scott Mascher kept hearing the same question again and again from concerned citizens: what does one do if an individual with an apparent mental-health issue is being disorderly, trespassing or doing something else that could be considered illegal?

Just a few years ago, there was nothing to do but call local law enforcement. When police would arrive, their training was limited on how to handle someone with a mental health issue, so the situation often resulted in an arrest.

Nor were Mascher and his colleagues at the Yavapai County Jail blind to this problem. The recidivism rate for those with mental health issues was very high – in some cases as high as 80 percent, Mascher estimated.

“We all started to notice, we see these same inmates coming back over and over and over, many times on low level misdemeanors and low level felonies,” said Jeff Newnum, assistant captain with the Yavapai County Sheriff’s Office. He commands YCSO’s Detention Services Division.

While the issue seemed apparent, what to do about it was not. So the YCSO began having discussions with local leaders in the criminal justice system and the behavioral health industry. As a result, it became clear that there were no pre-arrest diversion strategies for those suffering with mental health crises, and significant efforts and partnerships would have to be made to establish such programs.

“It’s a change in how we do business,” Mascher said.

The pilot for the new program began in Verde Valley about three years ago and by now is used throughout the county, he said.

Some of the major developments over those three years include the following:

The treatment providers, including Spectrum Healthcare in Cottonwood and Terros Health in Prescott Valley, launched 24/7 mobile crisis-response programs, so that community members and law enforcement agencies have resources to turn to when professional assistance is needed to manage a mental health emergency.

The Yavapai County Jail also created a mental-health unit to more responsibly house and care for the mentally ill who are arrested and willing to participate in treatment while incarcerated. Grant money has made it possible to pay treatment providers to come into the jail and assess inmates’ needs for mental-health treatment and develop treatment plans for them.

By all accounts, the results of these initiatives to avoid criminalization of those with mental-health conditions have been positive.

For example, from the time Spectrum Health launched its mobile crisis response program on Feb. 1, 2016, through Nov. 30, 2017, the program responded to 560 calls from law enforcement. Of those responses, only seven resulted in arrests, according to police reports. The rest of the incidents were either stabilized at the scene or the mentally ill subjects were diverted to medical care, such as the emergency room.

Similarly, West Yavapai Guidance Clinic’s crisis stabilization unit has served many who may not have otherwise received this kind of help. From the opening of the CSU in June 2017 through Jan. 17 of this year, 1476 people came to the CSU of their own volition, the CSU’s records show. And in the last six months of 2017, from June through December, law enforcement dropped off 172 people at the CSU.

According to David Rhodes, chief deputy for YCSO, these collaborative programs -- aimed at providing mental-health treatment and diverting the mentally ill from arrest — have led to a dramatic reduction in recidivism among that population at the Yavapai County Jail.

“Today we have a recidivism of 19 percent to 26 percent – right in there – for a population that was probably 60 to 80 percent,” Rhodes said.

As Mascher notes, the reduction in recidivism also saves the taxpayer, when people who are mentally ill receive the treatment they need, rather than being dragged through the criminal justice system (involving costly jail time, court appearances, and judges and attorneys, too) or regularly sent to the emergency room unnecessarily, at a cost of $5,000 to $10,000 per visit.

“This is the right thing to do for Yavapai County and our communities,” Mascher said. “You shouldn’t be a criminal for having a serious mental health issue.”

The YCSO is also seeking funding from the state to expand a program that would help county inmates post-arrest, as they reenter the community after completion of their jail sentences. The proposed program could also be replicated throughout Arizona.

For more on how the program would work and how funding for it could be used — if approved by the Arizona legislature — see the accompanying article, Sheriff’s office expanding post-arrest diversion model.