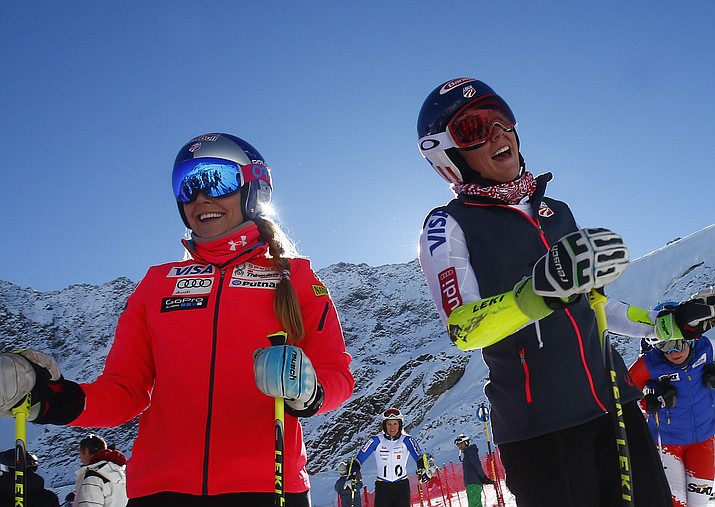 In this Friday, Oct. 23, 2015, file photo, Lindsey Vonn, of the United States, left, and teammate Mikaela Shiffrin stand at the finish area at the Rettenbach glacier in Soelden, Austria. (Giovanni Auletta/AP, File)

Separated in age by about a decade, Lindsey Vonn and Mikaela Shiffrin head to the Pyeongchang Olympics as the past, present and future of ski racing in the United States and around the world.

In the World Cup, their sport’s annual measuring stick, Vonn, 33, owns four overall titles; Shiffrin, who turns 23 in March, is on pace for her second. Vonn has won 81 World Cup races, a record for a woman and second most for anyone in history; Shiffrin is halfway there.

Each claimed an Olympic gold medal in her specialty: Vonn in the downhill in 2010; Shiffrin in the slalom in 2014, when Vonn was out after right knee surgery. Now, with the opening ceremony in South Korea on Friday, arrives the first — and, presumably, last — chance for them to share the spotlight at a Winter Games.

“The regard they have for each other is extraordinary. Lindsey is such an incredible, achieved athlete, and Mikaela looks at her that way, in awe of her. And at the same time, Lindsey is clearly in awe of Mikaela’s accomplishments, as is the entire world, of course,” U.S. Ski and Snowboard Association CEO Tiger Shaw said. “You have two of the most powerful women in the athletic world, and they’re both battling for their own goals, and they both want to achieve as many medals as possible in these Olympics.”

Vonn will be an overwhelming favorite in the downhill in South Korea, having won the last three World Cup races in that event. She also could contend in the other speed event, the super-G, and the combined, which adds the time from one downhill run and one slalom.

Shiffrin, meanwhile, can — indeed, will be expected to — become the first with consecutive slalom golds; she won five of the past six World Cup slaloms she entered. She also could win a medal in the other technical event, the giant slalom, along with the combined, and is likely to be in the starting hut for speed events, too.

“I like to try to understand what makes them tick and makes them so great,” Shaw said of the American team’s two best racers, “and then we try to bottle that up and make the other athletes understand what that is, so they can use it, too.”

There are, to be sure, connections between Vonn and Shiffrin, who are both based in Colorado.

And, of course, the comparisons perpetuated by others.

“It’s so ingrained. They always compare Mikaela to Lindsey Vonn. ... It’s a normal thing for people to do,” said Shiffrin’s mother, Eileen, who is one of her coaches. “But Mikaela, right from the get-go, always said: ‘I’m not Lindsey. I’m not The Next Lindsey Vonn; I’m Mikaela Shiffrin. That’s who I am. That’s who I want to be. I don’t want to be Lindsey Vonn. And I don’t want to ... follow in her footsteps. Or any of those things. We’re not even doing the same events, for Pete’s sake. So I’m not The Next Lindsey Vonn.’”

There is, though, a mutual admiration.

“Lindsey was one of my really biggest idols growing up. And I still have an enormous respect for her. The career she’s had, the focus and energy that she puts into this sport,” said the younger Shiffrin, who studies video of Vonn’s downhill runs. “So to hear anybody with the kind of success that she’s had say anything remotely positive about me is very flattering.”

Vonn does have plenty of nice things to say about Shiffrin.

During one recent interview, for example, she called Shiffrin an “amazingly talented skier” and praised her as someone who “works incredibly hard” and who “definitely has a lot of possibilities in front of her.”

While their careers have overlapped, they have not faced off much for a variety of factors. Among them: time Vonn lost to injuries, her focus on the downhill and super-G — she’s entered zero slaloms since 2013 — and Shiffrin’s relatively recent venturing into those events.

So while the two collected a combined 194 top-three finishes in World Cup races, they did so on the same day only once.

That was on Jan. 19, when Vonn was second and Shiffrin third in a downhill at Cortina d’Ampezzo, Italy.

“It’s weird that we haven’t been on the podium together before. Because we’ve both been successful, just not at the same time,” Vonn said.

“It was really fun. We’re going to be on the podium a lot more together in the future, which is great.”

Perhaps as soon as this month in South Korea.

But who knows for how much longer that will even be a possibility? Vonn plans to compete for another World Cup season with two aims in mind: She wants to get permission for a barrier-breaking race against men and plans to eclipse Ingemar Stenmark’s mark of 86 career victories.

If — when? — she does the latter, it could be just a matter of time until Shiffrin betters Vonn’s record. After all, Shiffrin’s 41 World Cup wins are the most for someone before her 23rd birthday and a remarkable 34 more than Vonn accumulated by that age. Yes, you read that correctly: 34 more.

Back during preseason training in New Zealand in 2015, Vonn and Shiffrin — rivals on the slopes, American teammates off — met at a coffee shop for hot cocoa and their first extended chat.

They talked about life and family and, of course, skiing, and the idea of going head-to-head as Shiffrin prepared to expand her repertoire to include the speed races that have been Vonn’s domain for years and years.

With Olympics coming, Shiffrin works because she worries
High winds becoming a problem at the Olympics
Lindsey Vonn ends season early with knee injury
Shiffrin wins super-G title but ‘never thought’ she could
Her knees 'broken beyond repair,' Vonn retiring after worlds