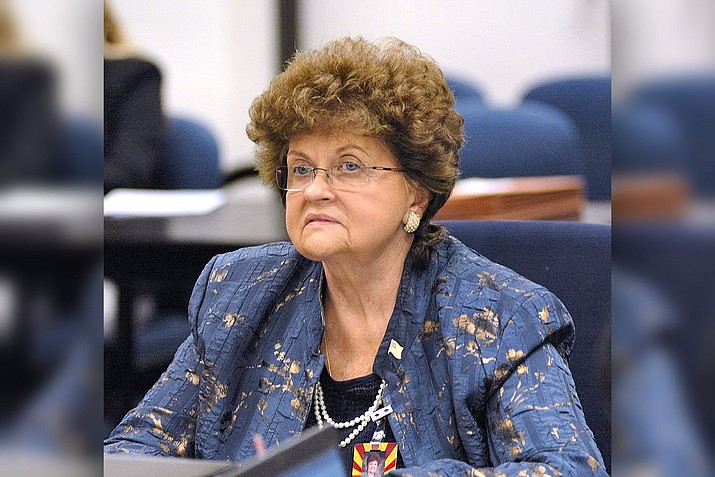 Sen. Gail Griffin, R-Hereford is championing SB 1167, which would exempt the first $10,000 of military pensions from the state’s income tax beginning in 2020. Under the proposed bill about 55,000 people who have served at least 20 years in the military would save about $280 a year. (Howard Fischer/Capital News Service, file)

PHOENIX — A tax break for military retirees has cleared a pair of significant hurdles.

Separately, the House Committee on Military, Veterans and Regulatory Affairs on Monday gave its blessing to HB 2236 on an 8-1 vote. It also would create a $10,000 exemption, albeit on a different schedule.

Under current law, people who get pensions from any government agency need not pay taxes on the first $2,500. That includes local, state and federal workers.

Sen. Gail Griffin, R-Hereford, who is championing the Senate version, said raising that exemption should be seen not as a tax cut but as a “workforce development bill.’’

“Many of the retirees have professions we need in Arizona.’’

It also has the backing of Gov. Doug Ducey who promoted it during his State of the State speech.

But SB 1167 still drew opposition from two Republicans who joined with eight Democrats concerned about the effects on the state’s bottom line.

Sen. Steve Farley, D-Tucson, pointed out that perhaps only 10 percent of everyone who has served in the military actually will get the tax break. More to the point, he argued that the loss of the estimated $15 million in tax collections will harm their interests.

One result, Farley said, will be “further cuts to their neighborhood public schools they depend on to give their kids a good education.’’

“Until we find the money to deal with our teacher crisis, to actually be able to pay teachers a decent salary when they’re actually 7 percent away from 49th (in the nation) at this point, I don’t believe we can afford to give away $15 million a year to a small fraction of the veterans in Arizona who would qualify for these benefits,’’ he said.

“If I’m renting a house, if I’m buying a House, I’m paying property taxes,’’ he said. And Borrelli, a retired Marine, lashed out at those who were opposed.

“I find it almost insulting to say that we’re trying to get something for free,’’ he said.

But that did not bring aboard Sen. Warren Petersen, R-Gilbert, who has argued against the measure all along. Petersen said giving tax breaks like this to a single discrete group interferes with his goal of eventually getting the state’s overall income tax rates as low as possible.

In the House, Rep. Richard Andrade, D-Glendale, who voted against the measure, said his concerns go beyond the lost revenues to the state.

He noted that supporters of the measure are promoting it by saying that it will bring more retired veterans to the state. Andrade said there will be implications for that if they’re correct.

For example, he said, part of the reason veterans were having trouble getting prompt care at the Phoenix VA Medical Center was that the facility lacked the staff to handle the workload. And Andrade pointed out that the state has fewer veteran benefits counselors now than a decade ago, state employees charged with helping vets navigate the system to get the benefits and services they need.

HB 2236 still needs approval of the Ways and Means Committee before it goes to the full House. At that point it likely will be altered to match the Senate version which puts the $10,000 exemption into effect in 2020.