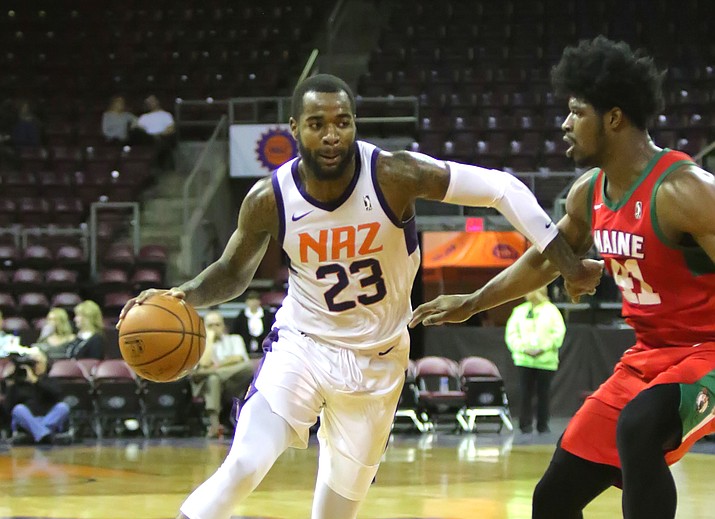 EDITOR'S NOTE: This story has been updated from an earlier version after statistical changes were made after the game by the Northern Arizona Suns.

Goodwin, Harrison each record double-double in victory over Maine

Mike Young scored a team-record 41 points, Archie Goodwin and Shaquille Harrison each had a double-double and the Northern Arizona Suns avoided a three-game losing streak with a 123-112 win over Maine on Friday night.

It is the third win in the last five games for the Suns (14-18), which were without regular starters Josh Gray (call up) and Alec Peters (two-way) and still managed to even their record at the Prescott Valley Event Center this season to 7-7.

Northern Arizona has lost three or more games in a row three times this season.

Young, who was 15 of 23 shooting from the field, including five 3-pointers, was 6 of 8 from the free-throw line and had 34 points by the end of the third quarter.

Goodwin, starting for the sixth time this season after being acquired from Greensboro on Jan. 7, scored 25 points and grabbed 10 rebounds, while Harrison narrowly missed a triple double with 12 points, 10 rebounds and seven assists.

Xavier Silas hit five 3-pointers and was a perfect 6 for 6 from the free-throw line to score 33 points, grabbed five rebounds and dished four assists.

For the Red Claws (16-18), which are currently eighth in the Eastern Conference and haven’t missed the postseason since the 2013-14 campaign, forward Anthony Bennett scored 24 points, while L.J. Peak and Daniel Dixon each added 21.

Bennett played 14 games for the Suns this season before being traded to Maine on Dec. 28 for the returning player rights to Wesley Saunders and a 2018 second-round draft pick, originally from the Windy City Bulls.

Early Friday morning the Phoenix Suns announced the call up of point guard Josh Gray from Northern Arizona and signed him to a 10-day contract.

Gray wore No. 14 for the Suns and made his NBA debut Friday night in Phoenix, hitting a 3-pointer in a 129-97 loss to the Utah Jazz.

The 6-foot-1, 180-pound point guard was called up after Phoenix guard Isaiah Canaan underwent successful surgery Thursday to repair a fractured left ankle he suffered against the Dallas Mavericks on Wednesday night in Phoenix.

To end the game against Utah on Friday night, Phoenix had Gray, Peters, Danuel House and Davon Reed on the court, all of which have played in Prescott Valley at some point this season.

Canaan, who came to Northern Arizona via trade with the Agua Caliente Clippers on Dec. 12, played one game for the NBA Gatorade League-Suns before being called up.

He is the sixth call up in Northern Arizona history.

The Suns announced Friday afternoon the addition of two former players, acquiring Zach Andrews and Steven Green from the available player pool following the call up of Gray.

The 6-foot-9, 230-pound Andrews was waived Nov. 12 when the Suns acquired Malik Dime. Green, 24, was one of three players to earn a training camp invite but was waived before the season began.

Northern Arizona will host the second of three-straight games at the Prescott Valley Event Center tonight when the Santa Cruz Warriors (18-15) come to town. Tipoff is set for 7 p.m.