Ask the Contractor: Prune for safety and plant health, appearance 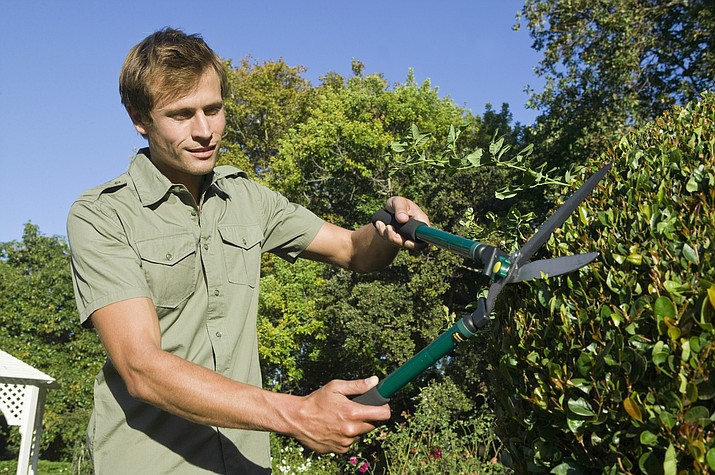 Most people can prune plants well with a little research, but don’t grab a set of pruners and go out and start pruning. It’s important to understand why you are pruning, how to prune and the best time of year to prune any particular plant. (Photo by MetroGraphics)

When your outdoor greenery looks sad or unkempt, you may consider employing your own handiwork, a landscaper or “an urban forester,” as Joshua Loveall, an arborist, describes his job.

There is a time and a technique to spruce up nearly any plant. The important thing is to know what’s required and how best to accomplish it.

Several local landscapers – including Loveall’s The Joshua Tree & Landscape Company – were approached about what, when and how to prune. All agree on the importance of pruning during dormancy, which could be winter or early spring, depending on the specific plant, shrub or tree. They also identify three main reasons for pruning: safety, health of the tree and aesthetics.

Part of the latter is deciding what you want the tree to be, the shape you want it to have. Pruning is discipline for plants. It should be done from time they are very young, so you won’t have a problem when they get older.

If you begin corrective, aesthetic pruning when trees are young, it’s easier to get the trees to grow the way you want them to grow. But don’t prune within the first year of planting a tree. After the first year, start pruning off the younger branches. Over the years, train the tree to be the structure you want.

Some of the benefits of aggressive pruning include protection against stress and damage from winds in spring and heat in summer, Loveall said. But improper pruning can upset the crown-to-root ratio, putting the tree at risk to topple over during storms, he said. Similarly, topping off can encourage chaotic growth, another unintended consequence of pruning.

“The tops of trees produce a hormone that regulates growth,” Loveall said. “When a tree is topped off, you remove the growth regulator (causing) thousands of suckers to shoot out everywhere and sending rot and decay down the root. If you want a hollow tree in (its) older life, top it.”

The first thing to look for in pruning branches is anything dead, dying or diseased, instructs Marc Vetere, owner of Manzanita Landscaping Inc. “Get those out right away,” he said. “From there, start looking at crossing or rubbing branches. Then, adjust the overall structure and aesthetics of the tree. These principals apply to all tree pruning…I have never found any plant that could not have used a little bit of pruning at some point.”

Pruning can differ by tree type, so know-how is essential. Some rules to keep in mind emerged in conversations with the landscaping companies:

• Thin the crown by removing cross branches or branches with narrow crotches, which are weak because they consist of more bark than wood.

• Do not cut more than one quarter of the crown at any one time. Instead, phase in the task over two or three years.

• Raise the crown for pedestrian, signage and other safety clearances.

• Ensure a strong stem by maintaining at least two thirds of the tree’s height while thinning and keeping foliage one third off the ground.

• Remove any limb on which half or more of the foliage is dead or dying.

• Go out on large branches as far as needed to get the weight off on a first cut, followed by a second cut about a foot long – to ensure a clean cut and no peeling of the bark.

• Remove suckers at the base of the tree (the tops also for fruit trees).

• Disinfect tools with alcohol (not bleach) and avoid using spikes on footwear to prevent spreading bacterial infection from tree to tree.

• Deflect heat – and sun scald – off the base (as needed) with special thick, white paint from a garden center.

• Fertilize and water all non-native plants, trees and grasses at appropriate times, so you won’t be wondering years out what went wrong.

“Removing deadwood in a tree is not just aesthetics,” Loveall said. “It also allows the tree to heal up and gets rid of insect hotels. (Deadwood) is like Motel 6 leaving the light on.”

Elms, cottonwoods and willows can stand trimming any time of year. However, it is important to watch out for bacterial diseases and fungus, including slime flux and canker worm. They get into running wounds – where trees have been trimmed – and cause something similar to a blood pressure problem in a human being. Sap pressure will kill willows, but cottonwoods and elms can survive for years, despite the unsightly wounds.

Some trees bear fruit from existing spurs (older wood), while others produce from tips grown the previous year. It is important to know which variety – or combination – before incorrect pruning ruins a potential harvest.

“Hybrid tea roses and floribundas thrive with annual hard pruning,” explained Chris Welborn, owner of Vicente Landscaping. “The rule of thumb is late winter or early spring after the buds start swelling. When you prune back, you are getting rid of dead and diseased limbs and promoting growth and future buds for flowering. Just use pruners and gloves for the thorns.”

Look first for dead or diseased canes or stems and get rid of them. Next, scan for “weird shapes, crossing or rubbing, or growing way out”, Welborn said. Then, thin out from inside the rose plant to allow air and sunlight to penetrate. Finally, cut down to 12 or 18 inches, depending on location and desired height.

“Doing all of those things promotes a healthier growth and new buds and gives good shape and size for the New Year,” Welborn advised. “Roses are pretty hardy. Don’t worry if you make a mistake; you are not going to kill the plant.”

Winter is the best time to prune summer-blooming perennials, including butterfly bushes, rose of Sharon and purple sage, Welborn said. Keep perennials in check, he added, but preserve size and shape.

“You want some foliage – dead or semi-dead – protecting the plant and root system over the winter,” Vetere noted.

Pruning, watering, feeding and other preventative maintenance are important to prevent disease and reduce fire risk, which continues to heighten with ongoing drought conditions. Winter weather can be deceiving when it comes to plant maintenance, Welborn said.

“When plants have gone two months without measureable precipitation, they need to be watered,” Welborn said, despite the dropped leaves and cold winter nights.

Most people turn off and drain their drip system over the winter, he continued. If the drip is not operating in winter, the homeowner needs to provide supplemental water when plants are not getting enough rain or snow.

“How much to water depends on the size of the drip,” Welborn advised, explaining that deep watering less frequently is better than watering less deep every day. “Deeper and longer watering promotes better root structure and better health of the plant overall.”

Loveall stressed watering a tree’s root zone, which averages twice the size of the top. “Ninety plus percent of all nutrient absorption and water is out at the drip line and further,” he said, a fact that many homeowners do not realize.

The average person can prune, with research and if willing to do it. But don’t grab a set of pruners and go out. You have to understand why you are pruning.

Vetere agreed, noting that many non-professionals “cut in ways that leave little stubs that will create problems…so re-growth is unruly and uncharacteristic.”

He recommended hiring an arborist to fix your tree. Improper pruning can kill a tree.

Ask the Contractor: Trees benefit from pruning, but do it right
Column: Cutting away the dead wood: It's pruning season
New Year Returns and Partners with Pruning
Don’t be too thorough with garden cleanup
Column: New Year signals the time to prune shrubs