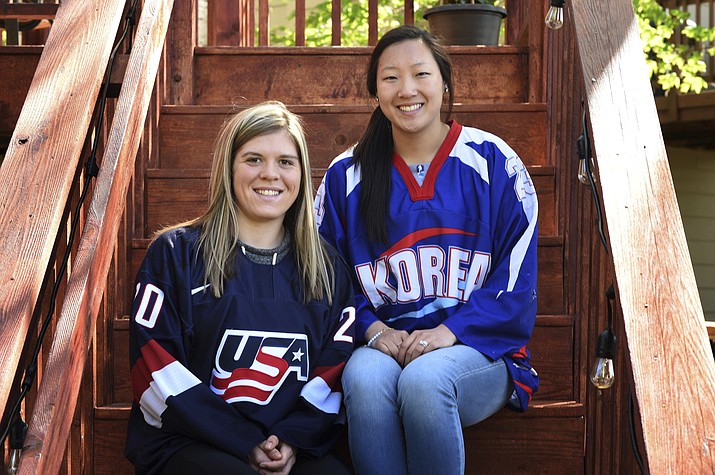 FILE - In this May 11, 2017, file photo, sisters Hannah, left, and Marissa Brandt, pose at their family's home in Vadnais Heights. Minn. Marissa, a native Korean who was adopted as an infant by parents in Minnesota, and her sister Hannah will both be playing in the upcoming Winter Olympics in women's hockey. Marissa for South Korea and Hannah for the U.S. (Scott Takushi/Pioneer Press via AP)

Your daily look at late-breaking news, upcoming events and the stories that will be talked about Thursday:

1 - WHY FBI, TRUMP ARE FIGHTING, AGAIN

The agency declares it has "grave concerns" about the accuracy of a classified memo on the Russia investigation that the president wants released.

The standoff between GOP and Democratic lawmakers gets further entrenched after the president asserts that "open borders have allowed drugs and gangs to pour into" the U.S.

While no serious injuries were reported aboard the chartered Amtrak train, one person in the vehicle died.

A new book by the activist and former actress includes a graphic account of being assaulted by the movie producer, whom she calls "the monster."

In Janet Yellen's final meeting as chair, The Federal Reserve keeps its benchmark interest rate in a still-low range of 1.25 percent to 1.5 percent.

Claims hit $11.8 billion for the combined fires last in October and December 2017, making them the most expensive blazes in state history.

Invasive carp threaten to enter the lakes, where scientists say they could out-compete native species and upend a $7 billion fishing industry.

That such orphans are now successful enough to afford an elite experience like the Olympic Games has surprised some of the locals in a patriarchal society where adoption is taboo.